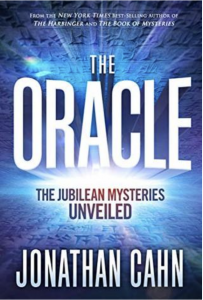 Wow. This was incredible, sweeping, and epic! Also, a genre unto itself. I’m not even sure how one would classify it. It’s non-fiction, but set in a fictional frame story. A narrator is given a series of fictional visions that follow the pattern of biblical prophecy. He meets a traveler to whom he recounts both the visions, and his subsequent encounters with the Oracle, who interprets the visions for him. The interpretation of the visions are non-fiction, though they incorporate both biblical and extra-biblical prophecy, and their later historical fulfillments as they pertained to the birth, scattering, and rebirth of the nation of Israel. The story told all revolves around the concept of the Jubilee, a Levitical principle of the restoration of land and property to the original owner every 50 years.

Cahn’s research is so meticulous and the fulfillments he describes so exact and detailed that after listening to the audio version, I downloaded the kindle version anyway so that I could highlight and save the notes for later perusal. I love how so many of these perfect fulfillments from 1867 on through 2017 are down to the exact day on a 50 year cycle (or sometimes a 70 year cycle–the 70 comes into play in reference to Jerusalem’s 70 years of captivity as prophesied by Jeremiah, and Daniel’s 70 week prophecy in Daniel 9). Even the names of the players involved are prophetic, and history had to happen ‘just so’ in order to bring it all together. It’s so exactly the kind of thing that God would do–to engineer details down to the minutiae, even though it went completely unnoticed for generations. Many of the fulfillments had multiple levels to them, which is also just like God, and  consistent with everything else I know about scripture. The verse that kept coming to me as I read this was, “It is the glory of God to conceal a matter and the glory of kings to search it out” (Proverbs 25:2). He hides things for us, not from us–and I believe He is pleased when we’re intrigued enough to seek the truth. (I sort of envision a Father hiding Easter eggs for His kids, and making them progressively more difficult to find as the child ages, commensurate with the child’s abilities. Make it too easy, and the game isn’t fun…)

I suspect there are infinite Easter eggs still out there, just waiting to be found!

Political content: depends on how you classify ‘political.’ Modern political administrations are mentioned.