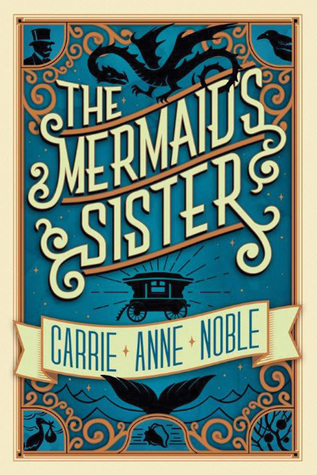 I absolutely loved this! Such a unique voice, and a whimsical story!

From the very beginning, the narrative voice makes it clear that this story is set in a fantasy world. Clara, the main character, finds that her sister Maren is developing scales on her body, turning into a mermaid. Their auntie who raised them told them stories all their lives of the raven who brought her Clara, the seashell that brought her Maren, and how their best friend O’Neill was found under an apple tree, though he was raised by their auntie’s husband (who did not live with her, for reasons they find out later.)

When Maren begins to turn into a mermaid in earnest, it’s up to Clara and O’Neill to get her to the ocean post-haste, before she withers away into nothing. This is the first conflict. The second conflict is that Clara, who grew up with O’Neill, suddenly finds herself in love with him–but believes that he is in love with her sister. The third conflict is that on their journey to the ocean, they find themselves captured by a traveling circus, quite willing to exploit Maren (a real live mermaid!) for their own mercenary purposes. Can they escape in time to deliver Maren to her true home?

While the very end contained a few Deux Ex Machina moments that were a little too convenient, I could easily overlook these because the rest of the story was so delightful. I raced through to the end, eager to discover how they would escape, and how Clara would discover that O’Neill really loved her after all. Because it’s the kind of story that ends in a “happily ever after”… that much was obvious from the beginning. Sure enough, I wasn’t disappointed!

Sexual content: none, which really impressed me considering the subject matter and opportunity for it

Violence: fantasy only, nothing to speak of