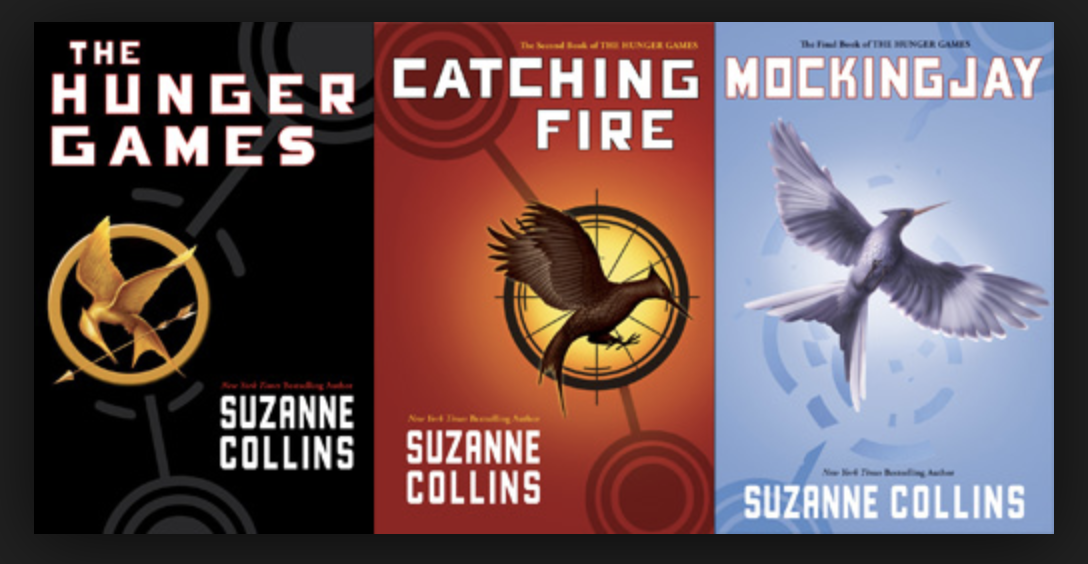 Review of The Hunger Games:

This is one of my all-time favorites, right up there with Harry Potter (though probably below it, because there’s a lot less fun and whimsy in this story). The concept, while grisly, was so completely new at the time when the story came out–no wonder it became such a sensation. The characters were also memorable, and the action nonstop. Even though I’ve watched the movies over and over again, the books still hold their own. There are so many details that necessarily can’t be included in a film version, because they happen inside of Katniss’s head.

The first time I read this, I thought the star-crossed lovers routine between Peeta and Katniss was a little contrived, there only to heighten the tension and add some romance for a YA audience. I didn’t think so this time, though: I totally bought why the Capitol would eat it up, and why Katniss would get the message that she had to go along with it if she wanted them to survive.

The part I still did think was a bit weak was (spoiler alert!) the poisonous berries at the end. Haymitch and Katniss both think that she’s in so much more danger after the Games are over, because she and Peeta forced them into choosing them both as victors by their threatened double suicide, and this somehow made them look foolish. This made very little sense to me–I didn’t see how they could possibly have viewed that as an act of rebellion. It was self-preservation, pure and simple. But I could easily suspend my disbelief there, because that vital point was what spawned the rest of the series. I just felt that there could have been a stronger motivation for the Capitol to suddenly view Katniss as a revolutionary.

I also like the fact that Katniss doesn’t go into the Hunger Games thinking of Gale romantically at all. (That’s less clear in the films.) She also truly believes that Peeta’s declaration of love for her before the Games was just a strategy, and doesn’t figure out it wasn’t until the very end. Maybe she’s clueless, but I bought it. Both of these facts make her behavior with Peeta, both in the arena and after, significantly less despicable. There’s a love triangle, yes, but not because she can’t make up her mind. There is a lot more at stake.

I’m excited to listen to the rest of the trilogy again!

Ugh. Man. I’d give this series six stars if that was an option. There are some stories that just make me ache, in a good way–like I just WISH I could write something so amazing, and at the same time I want to celebrate that *somebody* wrote it and it exists in the world. Everything comes together so beautifully in this trilogy: the creativity of the story (even though the market has since been glutted by copycats), the perfect characterization (nothing seems to happen to keep the plot moving; it all seems organic, like it couldn’t happen any other way), and the themes that seamlessly illustrate what truly matters. There’s the perfect balance between external cataclysmic conflict, and interpersonal conflict–and no easy answers for any of it.

And yet, the idea of the Hunger Games was such a risk, probably, because the concept is so grisly, and the target audience is young adults. It’s almost surprising that this is up there with my all time favorite series, since I dislike gratuitous violence and hate anything that ends sad… but I think Suzanne Collins managed to take a grisly concept and make it both tasteful and bittersweet. These definitely all end on cliffhangers, but for the kind of story this is, I think that really works. Just so, so good.

As much as I LOVED this entire trilogy… I think I’ve always liked Mockingjay the least, because it feels like a bit of a let-down at the end. It’s still fast-paced, the characterization is still amazing, and there’s one major unexpected twist that I thought was brilliant. But the ending, while realistic, is just so sad. It’s bittersweet at the very end, really, but not triumphant, and not even really redemptive. Katniss just ends up broken, surrounded by ghosts of her past. She never chooses between Peeta and Gale, either–the story does that for her, which I think makes the one she ends up with feel like a default choice, even though I think he was the right one, given the way this particular installment played out. He just happens to be the only one left to her, pretty much in the entire world.

…Would I have changed it? I’d probably have had a much lower body count–of all of the books, this one I felt was the grisliest of all. I also would have left out the last and most significant death of the books, leaving Katniss with a life to go back to at the end and some residual glory in the new Panem. This also would have forced Katniss actually choose Gale or Peeta. And I might have changed the dynamic between Katniss and Gale in this book, thus altering which of them she ultimate chose.