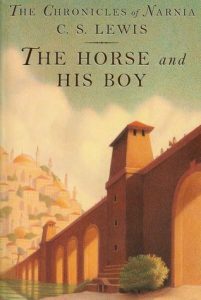 I recall this being one of my favorites of the Chronicles of Narnia from way back when. Now I feel like they’re all my favorite!

The royal twins separated at birth trope makes an appearance in this story, but as it might have been the first time in my life I ever actually heard it, it seemed fresh at the time. Lewis clearly borrows from Middle Eastern culture in his description of the nation of Calormen, but it’s quite believable. The story takes place during the reign of Peter, Susan, Edmund, and Lucy in Narnia, though Peter is the only one who never makes an appearance in the story. We learn more about Archenland, Narnia’s neighbor and ally. This time through I found myself wondering how so many humans had made it into the world, though, since the previous two books made such a big deal about the fact that there were no humans at all.

My favorite part of the story is how Aslan explains Shasta’s experiences to him after the fact–how Aslan himself, seeming to be an impediment (a wild lion) drives him to go exactly where he needed to be on multiple occasions. It seems like such a great allegory of how the Lord guides our lives, even when we don’t recognize that it’s Him.