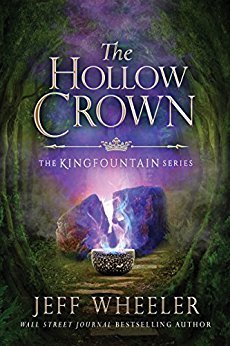 This one took a bit longer for me to get into than others in the series, mostly because it introduces and follows new characters, and I had an initial aversion to Trynne Kiskadden because the name Trynne sounds so much like Tris (from the Divergent series. One of my least favorite heroines ever!) Fortunately, they are nothing alike. Trynne is a far more likable and relatable teenager, and while she is trying to “find herself,” she has no angst whatsoever. 🙂 Trynne also has a crush on Evie’s son Fallon, who is impetuous, arrogant, and thinks of her as a cousin–or so he says. The dynamic between them is intriguing, but I think it festered a bit of leftover resentment I still held over the fact that Owen and Evie didn’t end up together. I liked Sinia a lot less in this book, probably because she seemed rather colorless and matronly. It still seemed like Owen got the short end of the stick.

Meanwhile, King Drew, the Arthurian character, and Myrddin, the Merlin character, were actually more peripheral than I expected. Drew marries Genevieve, Evie’s daughter and also the Guinevere character. Owen holds the seat of the most valued knight at the circular table, but Trynne secretly knows that she will inherit it. With Myrddin’s help, she finds herself whisked away by the power of the Fountain to become the first of this generation of Oath Maidens, the women who will ultimately train for the coming war. Her story echoes Joan of Arc a bit, which obviously isn’t part of the Arthurian legends, but it’s a great addition.

I find it very hard to review this series, and I’m not entirely sure why. While the plot is coherent, there’s a lot going on, so much so that I don’t focus on all of it. This gives the overall impression that it’s a world that is complete within itself, which is part of what I like about it. It’s a more complete escape than a lot of other fictional stories seem to be.