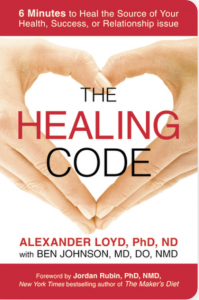 I’ve already recommended this book to several people, but I’m not giving it 5 stars for a couple of reasons.

The concept is that all problems in life go back to cellular memories that we can reprogram, more or less with prayer and concentrated meditation on a regular basis. I agree with this to a point, and it’s very similar to a lot of other energetic healing approaches I’ve heard of, such as Emotional Freedom Technique especially, and to some degree EMDR. Like EFT which employs tapping of acupuncture points during treatment, the Healing Code employs what I think essentially amounts to Reiki, pointing fingers an inch away from a few glandular structures in the brain and throat during treatment. I don’t know the reason for this; the book just asserts that it’s necessary. My guess is that this serves as a distraction for the conscious mind, allowing the words of the procedure to sink in more deeply into the subconscious–but because I don’t understand why it would do more than this, and the book doesn’t attempt to explain it, I suspect that’s all there is to it. Nevertheless, I think any version of regular focused meditation and prayer would be very beneficial, and so I don’t dispute some of the lofty claims of the authors. I also think that some of the questions the authors teach patients to ask themselves allows even less self-aware individuals to get at core beliefs in order to reprogram them.

A good 2/3 of the book is a combination of theory and testimonials, which is fine as far as it goes, and I understand the reason behind it: considering they’re asking the reader to take a leap of faith, since there aren’t any clinical studies behind this, they have to get your faith on board before they launch into specifics. If they didn’t, you’d scoff and put the book down. And while I certainly do agree that there’s a lot more to how quantum physics interacts with medicine than we currently understand, it still makes me skeptical, at least initially, when someone invokes a quantum mechanism of action for an otherwise unexplained modality. It very well may be quantum–but because we don’t understand it, any modality can equally claim it, and it’s equally un-provable.

I view the Healing Code as one path towards accessing unconscious memories and beliefs that hinder one’s current life, and reprogramming them. Not the only one, as they seem to claim, but a good one nevertheless, with the added benefit that you can learn it and do it to yourself. You don’t need to see a practitioner in order to experience the benefits. So I give them points for that, for sure: this isn’t a money-making scheme. They just want people to have the information.