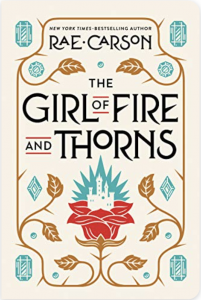 It’s rare that I enjoy a fantasy this much!

The storyline is fascinating–the fantasy elements are very religious, and tangentially related to recognizable Christian themes, but it’s set in a different universe. The fantasy revolves around the Godstone, a stone that God places in the navel of His “Chosen One” every hundred years. The stone is supposed to give the bearer some sort of mystical power to perform a great act of service… only not every bearer actually seems to complete any such recognizable act. The religion of this world borrows from some of the conundrums that many identify in Christianity, such as why God seems to allow bad things to happen to good people, and the bitter theological disputes that can arise amongst different denominations. The sacrament mentioned numerous times in this story, the sacrament of pain, seems to suggest the way many Christian denominations view suffering in our world: as a method for God to cleanse us. (I don’t agree that this is the cause of pain, but I do agree that it can serve this purpose as a side benefit.)

Elisa, the main character, is a sixteen year old princess betrothed to a king of a neighboring nation whom she has never met, but similarities to standard fairy tales end there. Elisa is the younger of two princesses, and her elder sister is far more suited to be a queen and a bride. Elisa is overweight, which is unusual in itself, as it’s a theme of the first part of the story and contributes greatly to her insecurity. She is the bearer of the Godstone, but seems to herself and also to those around her to be fairly useless.

Then she gets kidnapped, and the real story begins. At first, of course, we are led to believe that her kidnappers are evil, as she herself believes. But as the story progresses, Elisa learns a great deal about the nations around her, their political dynamics and even wars of which her new husband has been kept ignorant. She learns of and reads from religious texts that describe the purpose of the Godstone–texts she never knew existed because of the religious tradition in which she had been brought up. Her kidnappers become her friends, including both a lover and a betrayer. She loses the weight, becomes physically and mentally formidable, learns to respect herself, and finds her purpose–or so she thinks.

A semi-spoiler and a warning: about 70% through the story, one of my favorite characters dies. I didn’t see it coming, and was shocked and dismayed… but I’d already invested so much in the story that I kept going. Afterwards I realized, how could it have happened any other way? But… ugh. Even so, Elisa herself is a compelling enough character and the world is fascinating enough that I’m glad I finished it, and I even might go on to the next book in the series.

Violence: present but not excessive