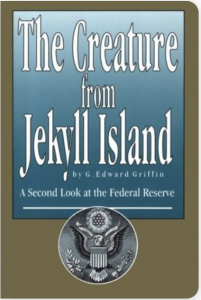 This is not a casual read; it’s a textbook on the history of bank fraud and how it ultimately brings down nations. And it’s a cautionary tale, of where America is headed, if we’re not careful.

The “Creature” referenced in the title is the Federal Reserve (which incidentally is neither Federal, nor a Reserve), conceived in secret on Jekyll Island by some of the biggest names in the banking and political industry in 1907. The Reserve was intended to function as a banking cartel, allowing all of the big banks to band together to protect any of them from ever going out of business. The very few honest banks in history simply made money from fees to house their patrons’ money, not from interest–because they did not take that money and lend it to others. Since so much more money can be made by lending the deposits out, though, this is what most banks do. While supposedly deposits are guaranteed, some 90% of the deposits are actually lent out to others and are not in the banks. This is why runs on banks can happen: if everyone wants their money at once, there isn’t enough to go around. Also, if enough people default on their risky loans, the bank eventually goes out of business.

The Fed prevents this: they bail out banks in this position by printing money out of nothing. This encourages the banks to make ever riskier loans, increasing the likelihood of defaults but also increasing their possible returns. Why not, if they can’t possibly fail? These bigger and riskier loans (given to big corporations and foreign governments) are much more appealing than the smaller and safer loans: more potential return, no real down side. The more these giants default on the loans, the more money the Fed prints. This in turn becomes a hidden tax to the people, in the form of inflation. If there are suddenly far more dollars to go around than there were a few decades earlier for the same amount of goods, supply and demand requires that prices must increase. It’s very much what happened in the housing bubble in 2008. Like that bubble, this one too must burst eventually.

A protege of the Fed, The International Monetary Fund appears to be part of the UN but is actually separate. It uses the World Bank to lend to nations with strings attached–the money is earmarked for certain kinds of “structural” changes that they approve. “The word socialism is not to be used. Instead, the loans are issued for government hydro-electric projects, government oil refineries, government lumber mills, government mining companies, and government steel plants. It is delivered from the hands of politicians and bureaucrats into the hands of other politicians and bureaucrats. When the money comes from government, goes to government, and is administered by government, the result will be the expansion of government.” According to Griffin, Communist regimes were the ones funded generously by the World Bank, while the prosperous nations funding the World Bank (mostly America) is slowly crippled by the hidden tax of inflation as the World Bank creates more “fiat” money to finance their various agendas.

It sounds pretty much like the Capitol versus the Districts in the Hunger Games, with many, many, many examples of recipient nations and the chaos that resulted: Brazil, Botswana, Nigeria, Argentina, Tanzania, Mexico, Russia, Eastern European countries, and most recently China. “The method by which world socialism was to be established was to use the World Bank to transfer money—disguised as loans—to the governments of the underdeveloped countries and to do so in such a way as to insure the demise of free enterprise… This has lowered the economic level of the donating countries but it has not raised the level of the recipients. The money has simply disappeared down the drain of political corruption and waste.”

“…A spokesman from the IMF would answer, yes, there is a plan, and it is to aid the less developed countries. But, after forty years and hundreds of billions of dollars, they have totally failed to accomplish that goal. Would intelligent people believe that pursuing the same plan will produce different results in the future? Then why do they follow a plan that cannot work? The answer is they are not following that plan. They are following a different one. …Through ‘loans’ that will never be paid back, the IMF /World Bank directs the massive transfer of wealth from the industrialized nations to the less developed nations. This ongoing process eventually drains their economies to the point where they also will be in need of assistance. No longer capable of independent action, they will accept the loss of sovereignty in return for international aid. …It is the conscious and deliberate evolution of the IMF/ World Bank into a world central bank with the power to issue a world fiat currency. And that is an important step in an even larger plan to build a true world government within the framework of the United Nations.”