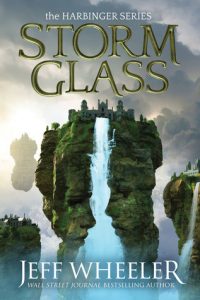 Jeff Wheeler does it again!

Like the Kingfountain series, this one also introduces child protagonists, going back and forth between Cettie, a little orphan girl who grew up in the “fells” (or the bottom rung of society,) and Sera, daughter of the emperor and destined to be the empress herself–at least in theory. It was very enlightening to learn in the author’s note at the end that Wheeler based this world upon Regency England, and yet he put his own twist on everything to such an extent that I never even saw the parallel. This is a fantasy world of literal castles in the sky (which made me think of Cosette’s song from Les Mis and then Wheeler said he was thinking of the same thing)–except that those castles can fall from on high if their owners fall upon hard economic times. It’s a world of ghosts, and the few (like Cettie) able to see them. It’s a world of political intrigue and machinations, as there is both a Prime Minister and an emperor who want to stay in power. Like all of Wheeler’s worlds, this one is so intricate, and the stories are so detailed that it’s hard to boil down the story into a clear summary. But I’m glad it’s the first in a series and that it doesn’t end here!

Political content: present but in context of the fantasy world