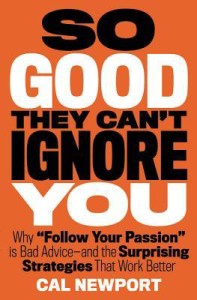 I listen to audiobooks like a fiend. At the moment, I’m listening to “So Good They Can’t Ignore You,” by Cal Newport. It is FASCINATING, and so biblical, though I’m pretty sure the author doesn’t know it. I didn’t realize it in so many words either, until I started listening to it.

I can summarize the premise in the following argument: the concept, “Follow your passion,” with respect to your job/career, gained traction in the 70s after the publication of the career guidance book, “What Color Is Your Parachute?” It didn’t become really popular, though, until after the 90s and into the 2000s.

Nowadays, self-reported career satisfaction is at a staggering all-time low, and Newport argues that this is directly related. This “follow your passion” mentality leads to constant dissatisfaction: i.e. even a good job is never good enough, because we’re looking for this mythical perfection which we will never find.

He argues that, according to apparently a lot of social science studies, what makes a career fulfilling is 1) autonomy, 2) skill (feeling like you’re good at what you do), and 3) socialization or a sense of connectedness with coworkers. Also, the degree to which workers reported being happy with their jobs by these metrics increased sharply as they’d been in the field for a longer period of time — which he assumes is because mastery and therefore autonomy increases over time.

Jobs that meet these criteria are rare and valuable, though. So the way to land one of them is to cultivate rare and valuable skills yourself: to become “so good they can’t ignore you.” He calls this the process of cultivating Career Capital, the thing you can trade for that rare and valuable job. Passion, he argues, should not be the starting place for finding a great career; rather, it is a byproduct of becoming good at what you do, and landing a job that gives you the autonomy to do it on your terms. If finding and following your passion becomes the driving force, though—if we become obsessed with finding the career that “fulfills us” first, it will lead to angst, and perhaps to career-hopping, in an elusive search for the pot of gold at the end of the rainbow.

As I listened to the book, I realized that that is very much a pair of cultural lenses I’ve grown up wearing — the “follow your passion” idea is so ubiquitous, it seems almost sacrilege to question it. Yet the alternative tends to be painted as, “Do something practical, even if you hate it.”

But what if it’s neither?

The Bible actually has strikingly little to say on this subject, and the disparity between that and the cultural mantra has always bothered me. What it does say is, “Whatever you do, work heartily, as for the Lord and not for men, knowing that from the Lord you will receive the inheritance as a reward” (Col 3:23-24). In other words, work hard at whatever you find to do. It also says, “Do you see a man SKILLFUL in his work? He will stand before kings; he will not stand before obscure men” (Prov 22:29).

So as you work hard, you become skillful. And the more skillful you become, the more attention you’re gonna get from people who matter—people who can offer you rare and valuable things like autonomy. (Or perhaps you can create your own autonomy and become your own boss.) The “follow your passion” advice, the way it’s presented to our generation, is the exact opposite of doing whatever your hands find to do to the best of your ability, cultivating mastery, and finding both recognition and fulfillment as a result.

Does this mean any job will do, though, and even if it sucks, you’ll eventually love it if you just stick it out and get good? Newport’s answer to this is that the job in question: 1) must provide opportunities for advancement, towards skill growth and autonomy; 2) the job must not focus on something you think is useless or actively bad for the world; 3) the job must not force you to work with people you really dislike. If it doesn’t meet these criteria, then it doesn’t have the potential to become a fulfilling career.

But if it does, stop looking around for the next big thing, buckle down and focus on building your career capital. Eventually, you’ll become skillful enough that you’ll stand before kings.