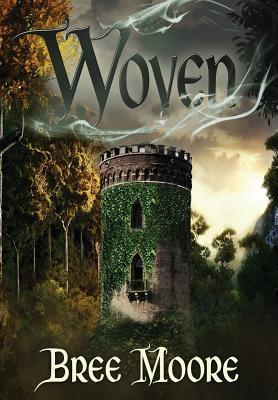 A preface to my review: this author and I should definitely be friends. Evidence:

So now that that’s out of the way…

I love retellings in general: they’re the perfect blend of something familiar and something unique. I know how the story should go (at least for the most part), but I’m constantly guessing what new twists this particular author is going to add. Woven was definitely full of twists, in many ways turning the tales upside down. No spoilers, but let’s just say that certain characters aren’t (only) who you think they are, nor are relationships between characters exactly what you’ve always heard them to be… and because we’re already in a world of magic, nearly anything is possible.

The story is told in third person limited, jumping around to different points of view—but primarily it bounces between Elaina (the Lady of Shalott), Sir Gareth, and Guinevere. Elaina and Mordred are lovers, well before Camelot’s time, and she becomes pregnant before her sister Morgan has her confined to her tower for her own protection. The Lady of Shalott pines away for unrequited love of Lancelot, or so we’ve been told… and this is both true, and not true in this story. Guinevere is unfaithful to King Arthur with Lancelot… which is also both true, and not true. Mordred and Arthur are said to be mortal enemies, and also father and son… which is true, but not in the same way you’ve always heard. The Lady of the Lake, the Sorceress Nimue, does imprison Merlin… but not for the reason you think. Moore even works in the story of Sir Gawain and the Green Knight (only in this case it’s Sir Gareth). The way she weaves these familiar tales together (no pun intended) was delightful.

The story still ends the way the stories all end—it is a tragedy, after all, and generally I don’t like sad stories. But it’s kind of like going to see the film “Titanic”: you kind of know what you’re in for by the title, and to me, it’s somehow easier to take when I know it’s coming. The fun was figuring out how we’re going to get there this time around.

(One caution though: this story contains quite a few fairly descriptive rape scenes toward the end. I didn’t care for this part, but it didn’t bother me as much as it otherwise might, because it was really the only possible way I can think of to explain the story’s main twist. If this isn’t for you, though, I’d steer clear.)