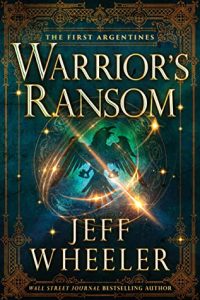 It’s interesting to me that I love these so much and yet when I finish listening to them, I’m not sure I could really explain the plot if asked, nor can I easily distinguish one of Wheelers’ series from the next. They’re all so similar. They have similar archetypical characters in nearly all of them too.

Ransom continues in this installment to find himself at the center of political intrigue between King Devon the Elder and his scheming sons. King Devon, like so many of Wheeler’s monarchs, is capricious and childish, though not truly evil. These flaws have destroyed his family, however. Many knights and servants of the kings are given in marriage for political reasons, which creates conflict between allegiance to one’s sovereign and allegiance to one’s heart. Ransom and Clare still love each other, but they are separated for long stretches of time. Devon orders Ransom to marry a neighboring duchess named Alex, and for awhile I thought it might actually happen (Wheeler’s stories aren’t always happily-ever-after), but then he learns that Alex is not who Devon believes her to be.

I love the fact that the heroes in Wheeler’s worlds are truly good, and consistently make decisions based upon their integrity, regardless of what might be most personally profitable to them. There’s a clear right and wrong, and the hero/heroine always has a strong sense of which is which. On the flip side, there are rarely outright villains; just characters who operate in areas of moral ambiguity. They make poor choices, and usually at some point they repent and find mercy. It’s a great balance, I think: uncompromising, yet gracious. Our world could use more role models like these.