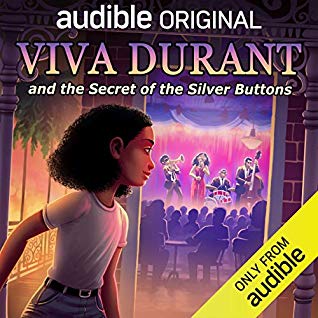 A fun middle grade listen reminiscent of Nancy Drew! (Not that I’ve read those in several decades, but this makes me want to revisit a few of them.)

Viva is 14, and visits her grandmother in New Orleans for a summer. She’s not at all excited about it until she stumbles across a newspaper article written by a man who claims to be the descendant of “Miss Mary Mack,” of the nursery rhyme song (which I’d never heard of before, and I wonder if it actually exists or if it was written for the purposes of this book.) The descendant believes that the lyrics to the song are actually a treasure map, and he’s searched for the treasure all his life but never been able to find it. Viva takes it upon herself to follow the clues to find the treasure herself… but she has to do so under the guise of chores for her grandmother, to keep her from finding out what she’s doing.

It’s a lighthearted adventure and mystery without any gore or violence. I like Audible originals because they usually involve music to create the atmosphere, and this was no exception. I also appreciated the fact that this story involves African American characters without making race an issue, one way or the other. Politics and racism never enters the story, which I find refreshing.