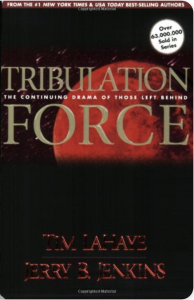 This series is such a study in contrasts thus far. On one hand, the portrayal of the acceleration toward Armageddon is gripping. I raced through to the end, engrossed in how Rayford’s and Buck’s lives become increasingly intertwined with that of Antichrist. I was fascinated with the portrayal of the two witnesses at the wailing wall–having just studied Revelation in detail, the dramatization and the authors’ interpretation of scripture seems very well done. I also cheered along with Buck as his Jewish Rabbi friend became (I presume) the first of the 144,000 Messianic converts, live on international television.

On the other hand, some of the characterization is painful. Not all of it, though: I like Buck and Rayford, and I love to hate Nicolae Carpathia. He’s very well written. The women read like they were written by men who don’t think much of women, though. Chloe isn’t always awful, but the misunderstandings between her and Buck that strings out their relationship for the first half of the book is quite forced. She comes off like an utterly irrational little woman with almost no thoughts for anything except what Buck thinks of her and whether their pastor Bruce secretly has a thing for her too. Buck sticks around and puts up with it anyway because for some unknown reason, he thinks she’s worth it. (The thing that apparently makes her worth it never makes it into the text. Perhaps it’s because, in this world, all other women are equally irrational and self-obsessed.) Hattie Durham is even worse: she’s a gorgeous airhead, and at first Rayford and then Carpathia only want her for her looks. (I had a hard time buying that the Antichrist, rapidly the leader of the entire world, would hook up with a flight attendant, no matter how gorgeous she is. Why not a supermodel or an actress–or better yet, seven? The Antichrist himself is actually faithful to one woman, really?) Then there’s Bruce, their pastor… he’s not that bad, it just bugs me that he always refers to Jesus as “Christ” every time he speaks of Him. That’s so impersonal. Christ is a title; His name is Jesus. It would be like referring to one’s husband as “Husband”–or even worse, “Sir.”

Despite that paragraph rant, I was still engaged even in the characters’ stories until the very end of the book. Suddenly, the entire first year of the Tribulation period skipped by in a few sentences. Rayford was all but engaged to a character we’d literally never met. After an excruciatingly slow blow-by-blow of Chloe’s and Buck’s relationship, where they’ve barely held hands, suddenly they’re also almost engaged. It was like the authors were running out of pages and had to hurry up and finish. I found this so off-putting that I went from poised to immediately buy the next book in the series to not sure if I even wanted to continue.

…I probably will though, at least for the next one. The biblical retelling part is just so interesting.