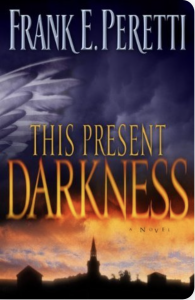 My mom read this book to me when I was probably in middle school. I’m on a kick at the moment to rediscover some of those old favorites, which I remember liking but little else about them.

Peretti definitely does not suffer from what I’ll call the Christian fiction malaise: the work of so many Christian authors or filmmakers ends up coming off cheesy, because they’re so focused on the message that they neglect the story. Peretti definitely does not. He writes a compelling, intricately plotted tale with good characterization for the most part, and beautiful prose.

The story follows two main characters: Hank Busche, the pastor of the little town of Ashton, and Marshall Hogan, the local newspaper editor who moved from New York to try to get away from the fast pace, only to find himself immersed in the story of his life. Meanwhile, the nefarious plot in Ashton plays out on both the physical and the spiritual plane. A powerful worldwide group known as the Universal Consciousness Society, which is really just a conduit for the occult, has slowly infiltrated all of the most powerful people in Ashton. Through demonic channeling and possession, they engage in extortion, blackmail, brainwashing, coerced suicides, murder, and human sacrifice, though no one outside of their circle can prove any of this. Anyone who gets too close and refuses to join, or who was originally a member and attempts to expose their corruption either has their life systematically ruined in ways that cannot possibly be traced back to the society, or else winds up dead. Very dark stuff, really–and it almost certainly wouldn’t be the kind of story I’d want to read, except for the fact that Peretti emphasized the power of prayer to drive back the darkness the whole way through.

And that’s just what’s happening on the human side. On the spiritual side, we see the various ranks of the demonic forces against the angelic warriors with a similar structure of power, whispering to and influencing their humans for good or ill. For his part, Hank perceives the spiritual elements but cannot figure out what they’re trying to accomplish in the natural realm. Marshall, on the other hand, isn’t a believer for most of the story; he’s just following the trail of corruption, determined to expose it. When the two finally meet about 3/4 through the story (in prison, having apparently succumbed to the nefarious plots of the Society), Hank exclaims that now they can finally each share with the other what’s going on on the other side.

I knocked off a star, though, because while the story made me stop and think critically about the dynamics of spiritual warfare (which the Bible doesn’t really talk about in very great depth), it seemed logically inconsistent to me and because of that, somewhat theologically confusing. I couldn’t follow the rules of “his” world as they pertained to angels, demons, and prayer. It seemed that the demons had the ability to deceive by the power of suggestion, to possess those who were willing, and to drive them to commit evil acts, as well as to fight directly against the angelic forces. So far so good. They had great power, but as soon as a believer (Hank) commanded the demon to leave a human body in the name of Jesus, they had to go–except, sometimes they didn’t, and I wasn’t clear what made the difference. The angels, meanwhile, seemed to have very little power unless the saints were praying. In the midst of a battle, they gained strength and started to win when the saints were praying, and started to lose when they weren’t. But if the saints were the ones who had the power to command the demons to go in the name of Jesus, and the angelic power was entirely from the prayers of the saints too, why were the angels even necessary?

At any rate, this started me on a Bible Study to see what the scriptures say about angels, since I’ve really never thought about it much before. So that can only be a good thing.

Violence: present, but not gratuitous