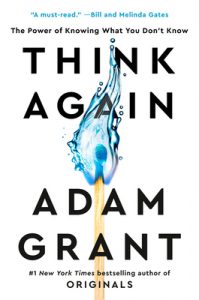 I agreed with and appreciated the main premise of this book, which was that we should all hold our beliefs and opinions loosely enough that we are open to evidence to the contrary. We should consider what evidence might change our minds, and be open to critiques rather than closing our minds. When approaching others to convince them to think again, we should do so with questions rather than adversarial attacks, as they are far more likely to convince themselves to rethink than if they receive a lecture on how wrong they are. Take human nature into account, in other words, and at least neutralize the ego component if you can’t make it work for you. Question only one aspect of the topic at hand rather than many; questioning many will likewise cause your “opponent” to feel they are being attacked, and they are more likely to dig their heels in to their original position. Establish (in the workplace or the classroom) an environment which values considering all the evidence, and asking questions over being right.

I agree with all of this, and have tried to practice it for years. Yet I felt the book was hypocritical, for two main reasons. First, I can only recall one example the author gave in which he himself described a time in which he’d changed his mind about something. He made comments throughout the book that he was always looking for ways to reevaluate his positions, but in practice, he depicted himself primarily as encouraging others to rethink theirs. The only example I can recall in which he rethought his own was in the context of listening to a public debate, in which he went in on one side of the issue and the opposite debater swayed his position. This certainly was not a personally or publicly humbling moment for him. I think the book would have been far more palatable, had the author exhibited more of the humility he espoused.

Second, while the author did use some apolitical examples of people changing their minds, whenever he did use political examples, they were entirely on one side of the political spectrum. He claimed to be nonpartisan, yet in every case he depicted a kind, reasonable liberal employing these psychological tactics combined with “the science” (#thescience, implying that it’s entirely on their side and anyone who thinks otherwise does so for reasons other than evidence). As a result, the person who held the conservative (and often the extremist version of the conservative) viewpoint realized the error of his ways. This would have been all right with me, had the examples either been entirely apolitical, or had there been examples on both sides. Better yet would have been if he had included two examples on the same issue, in which each side rethought his perspective. The fact that his examples were what they were, though, transformed the book from a reasonable and valuable premise to a piece riddled with insidious propaganda. I suspect this would only reinforce a liberal reader’s view that they alone have a corner on “the science” (which has really become a buzz word which doesn’t have to be defined, and brooks no room for debate), and that anyone who holds a different view is, at best, ignorant. This is the exact opposite of the ostensible premise of the book.