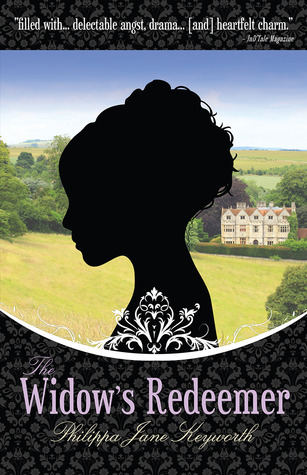 Any fans of Jane Austen will love this book! Keyworth almost seemed to channel Austen in the language she uses, and the book is also set in 18th century Britain, and her description of society is almost exactly the same. More than once I thought it was an intentional retelling of Pride and Prejudice: Letty (like Elizabeth) is the spirited but poor and untitled lady with a frivolous mother-in-law (like Mrs. Bennett), and she immediately dislikes the wealthy and handsome Viscount Beuford (like Mr. Darcy) for his arrogance. He, on the other hand, is captivated by her wit, and despite her discouragement, proceeds to pursue her.

There are a few rather major differences from Austen’s famous story, though: as the title suggests, Letty is widowed. We meet her first husband only very briefly in the first chapter, and while he’s a caricature of an abusive rake, he doesn’t really need much depth for the purpose he serves in the story. Letty has a silly sister-in-law Theo (like Elizabeth Bennett’s younger sister Lydia) but she doesn’t play a huge role in the story, and she does have a plain friend Sophie (like Charlotte Lucas), though her role is more to give Letty a confidante than anything else. Letty’s first husband’s friend, Major Deverill (sp? I listened to the audio version of this story) takes her under his wing as her protector, even though he certainly could have played the love interest himself. (I wondered a few times why the relationship was so platonic, actually.) The main conflict toward the end involved Letty’s first husband’s gambling debts–and just as Mr. Darcy saves the Bennetts from disrepute, Viscount Beuford comes to Letty’s rescue, having to tread carefully to avoid upsetting the delicate sensibilities of society in order to do so.

Each chapter begins with a quote came from some famous work of literature or philosophy, and my first clue that the inspiration from this story might have been something other than Pride and Prejudice was one that came from the biblical book of Ruth. I did at that point notice that Letty’s commitment to her mother-in-law was much like Ruth’s commitment to Naomi, and the word ‘redeemer’ in the title did evoke the concept of the Kinsman Redeemer from Ruth. At the end of the book, the author states that The Widow’s Redeemer was in fact meant to be a retelling of Ruth. I see it in hindsight–I guess the language and customs just evoke Austen so strongly that it was hard to see past the more obvious similarity.

I often wish there were more Austen novels out there yet to discover, so I’ll probably read more of Keyworth’s work, in hopes that they will fill the void!