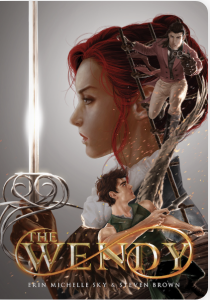 There was so much potential here.

I love retellings in general, and this one started out so creative, with such a whimsical and compelling narrative voice. Wendy is an orphan herself, living in Britain during the Golden age of piracy. She’s always dreamt of being a sailor, but, alas, she’s a woman. (And, here’s where the wokeness comes in. It didn’t take long, and it’s interwoven throughout the story.) ON and ON she goes about how she’s “only” a woman, and therefore no man expects her to know anything, or to be able to fight, or to do anything but raise babies. But Wendy is determined, and a series of unlikely events transpire to give her the opportunities she desires… unfortunately, on Captain Hook’s ship, though she doesn’t know it’s unfortunate at the time.

John and Michael are not her brothers, but two soldiers who have trained with her and who both are vying for her attention (because she’s gorgeous and adorable and basically every man who meets her worships her, even though she doesn’t give any of them the time of day. And she knows it, too.) Peter and the Everlost are almost mythical, and they’re villains to Wendy’s knowledge at first, swooping in and stealing children from their beds, and killing and maiming in their pleasure. At first Wendy believes that she’s doing good to help Hook find them and capture or kill them, though it’s hard for her to trust anything Hook says once she meets him and discovers how patronizing he is to her (because again, she’s “just a woman.”) After a few interactions with Peter, though, Wendy is intrigued by the fact that not only he, but also his entire ship can fly–and she also has begun to believe that there is another side to the story about him and the Everlost than what she’s always heard.

They completely lost me when ***spoiler alert*** Wendy betrays Peter to Hook. She thinks she has a really good reason, and she feels really guilty about it, and it doesn’t turn out nearly as poorly as it might have, but it didn’t matter. I was already on the fence about whether I even liked Wendy or not. After that, I decidedly didn’t, and while I finished the story, I won’t read on. Bummer, because really, the narrative voice is so engaging, and the story had a lot of potential too.