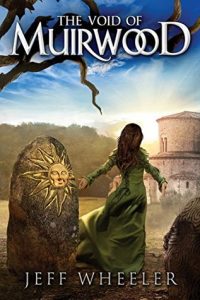 What a satisfying conclusion to another great trilogy!

As rich in detail and complex in characterization and plot as all of Wheeler’s other stories, this one follows now-Queen Maia through the tumults of protecting her people from a coming invasion, even while expressing incredible mercy and pity towards her enemies because “they know not what they do.” She’s tempted and betrayed in every possible way, yet she holds fast to her Maston principles (whose tomes are essentially the Bible, as I recognize quite a few of their verses). When it seems everyone but her has or will someday achieve their heart’s desire, she does not allow herself to wallow in jealousy or self-pity, as she knows this will make the Medium flee from her. When it seems she has lost everything and has no hope left, she clings to her faith in the Medium’s will, even though she knows Its will may mean her own destruction, and may look evil in every way. (And Wheeler is an unpredictable author: his endings are not always exactly happily-ever-after. So there were moments in there where I really thought he was going to leave Maia, and us, in utter devastation.) But her faith and trust against all odds is overwhelmingly rewarded: the end brings blessings galore, even those that seemed forbidden to her throughout the entire series. In a book set in our world, I might accuse the author of a deus-ex-machina fallacy, to suddenly introduce a new rule which allows for such reversal. But there’s so much suspension of disbelief in Wheeler’s worlds anyway that it just works.

The afterword at the end gave some fascinating context: Wheeler was inspired to write the character of Maia by the real-life saga of Queen Mary, aka Bloody Mary (which seems an odd choice, since I always thought of her as a villain, and Maia is goodness personified). All of her back story is inspired by the queen’s various escapades, even down to her betrothal to a foreign royal though they were kept apart for years. This makes me want to watch a documentary on Bloody Mary now.