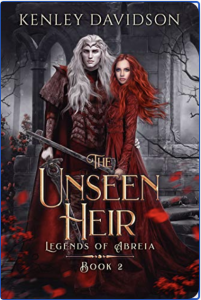 This was so satisfying, in a guilty pleasure kind of a way… though I can’t quite say what was guilty about it. Like all of Kenley Davidson’s books, it’s totally clean, so it’s not that… it’s a romance cloaked in a fantasy adventure, which is my favorite kind of romance.

The Faceless Mage ended on a cliffhanger: Leisa had fled from the kingdom of Garimore and the Raven was compelled to pursue her. She managed to use her power to free him from his spell of bondage, unshackling him almost entirely and unmasking him so that she saw that he was a (terribly gorgeous) night elf named Kyrion–one of the most terrifying magical creatures in their world. He needs Leisa to free his magic, which is the last thing that remains bound, but she’s too weak to do it at the moment, as it drains her. She also has information that her king of Farhall needs, that Garimore intends to attack them. Because Kyrion believes humans are prejudiced against night elves, he doesn’t go with her, but fears that she won’t return because he’s been betrayed so many times before. Unfortunately, Leisa’s king fears her knowledge and imprisons her. Kyrion still has a magical bond to her, and senses that she is in distress, so he goes after her.

I’m not entirely clear on all the reasons why the various people chase Kyrion and Leisa as they flee, but the tension and heightened emotions make clear to each their feelings for the other. There’s a lot of, “Oh no, is he dead? Is she dead? I would die for him/her!” But even though the scenarios were clearly contrived to evoke these thoughts and emotions, it was so well done that I still enjoyed it. They end up in Kyrion’s land, where his absence for the previous 10 yrs perpetuated political turmoil. The night elves also hate humans, so Leisa has to be protected too–until she learns that again, Farhall is under imminent attack, and she is convinced that not only is she the only one that can save them, but also that her presence in Kyrion’s land will never be accepted. We think the star-crossed lovers who have only just admitted their feelings for one another will never be together, as they return to their respective battles…

The action is nonstop, and yet it all seems almost like a prop for the relationship. I don’t mind that a bit, though. The story was the perfect balance between romance, action, and fantasy, very well paced, and just gushy enough without crossing the line into eye-rolling. Also, I was relieved to find it was a duology and not a trilogy or longer, even though I got the impression from the epilogue that two secondary characters will become primary in subsequent books in the series.