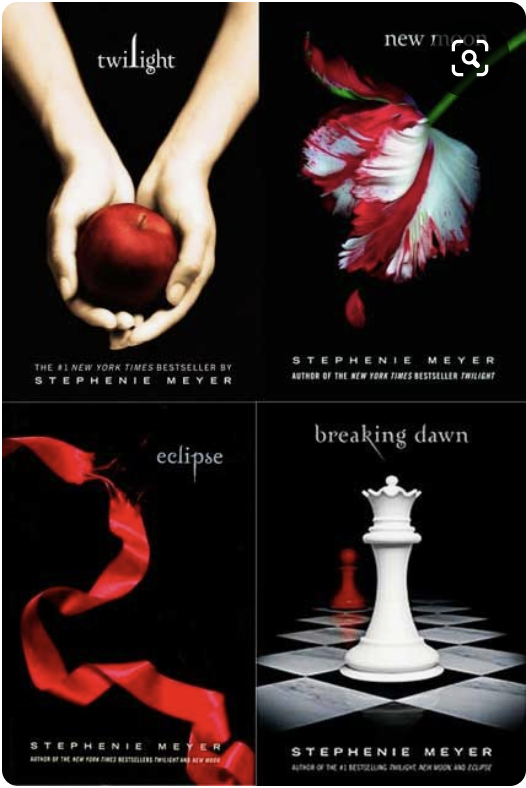 The experience of reading this series is such a strange contradiction. There are so many things I dislike about it… and yet, I want to keep reading.

First: if we cut out the number of times we’re told about Edward’s glorious perfection, I think the book would be 25% shorter. OKAY. WE GET IT.

Second, Bella seems to have two modes of operation: gushing over Edward, and pouting over one thing or another (which everyone around her seems to find endearing, for some reason. But I just find her whiny.)

Third, the first 75% of the book is just Bella and Edward meeting, the tension of her not knowing that he’s a vampire, her finding out he’s a vampire, and then them getting to know each other. The conflict is almost an afterthought… as if the author realized, ‘oh yeah, this isn’t really a book yet, it’s just a scenario. Better throw in some conflict.’ The actual conflict feels pretty flimsy, too. So many of the situations are just damsel-in-distress moments for Bella, so that Edward can swoop in and save the day.

Fourth, it’s slightly creepy that Edward, technically eighty-something years old, is completely obsessed with a seventeen year old girl. He might *look* like a seventeen year old himself, but surely that many decades of life experience should render him so mature that he’d have no patience with an actual teenager.

…And yet. Despite the fact that I rolled my eyes almost constantly, I still ripped through the book quickly, *and* this is the second time I’ve read it. The first time was years ago, when I was in a very different life stage; therefore at the time, I found it to be far more addictive and absorbing then than I did this time. But despite my exasperation, there’s something about it that not only kept me reading, but made me pick up the next book too.

What is that something? I feel like this book is a caricature of THE classic female fantasy. The main character is (in her own eyes at least) plain, clumsy, boring, weak, ordinary… not special or talented in any way. And yet, this perfect, god-like man is utterly and unconditionally obsessed with her. He’s protective, capable, and completely selfless, ready to die for her, commit suicide for her, kill for her, or let her go if any of the above are the best choice for her. And while this is a very human incarnation of the story, I think that this is so desirable because it’s an allegory of the gospel, intentionally or not. (“While we were yet sinners, Christ died for us”… the perfect god-man, whom “we love because he first loved us,” who cares intimately about every detail of our lives and who came to give us “abundant life.”) That’s my theory, anyway.

Years ago, I think I stopped halfway through the third book in this series, perhaps because the story diverged so thoroughly from this core thread that the intrigue was gone for me, leaving nothing but pure exasperation in its place. We’ll see if I make it further this time.

I remember liking this less than Twilight the first time I read them, yet somehow this time I saw it as a huge improvement!

Bella is way less annoying in this one… probably because for the bulk of the story, Edward isn’t around. Edward is so perfect and the disparity between them is so extreme that Bella has to resort to whining in order to create conflict. But with Edward gone, Bella is around actual peers and equals, so she seems like a normal, relatable person. Not even all that self-centered. I also could sympathize with her unrequited desire for Edward in his absence, as well as her drive to do whatever it took to hear his voice again — and it was a really interesting device that she *did* hear his voice pleading with her to stay safe whenever she put herself in danger (even though this was never explained. At all.) The tension of their separation really carried the story, I think. It also meant that there necessarily wasn’t so much mooning over Edward’s perfection, because he wasn’t there for her to do so.

But, while I like Bella a lot better when Edward isn’t around, she’s the POV character, so I identify with her. So even though I think Bella would be much better suited to Jacob, I can’t really root for Jacob, because Edward is perfection itself. Jacob is just a moody teenage boy. If I’m identifying with the character who gets one or the other of them, then clearly there’s no contest.

And yet (spoiler alert)… as satisfying as Bella’s and Edward’s reunion is at the end, it becomes *painfully* sappy once the immediate danger passes. Like, take-you-out-of-the-story, can-I-even-bear-to-listen-to-this sappy. Bella immediately reverts to the same weak, whiny, mooning character she was before.

…But I’m still reading on! Something about the emotional experience created by this series, even with all its flaws, still makes it so compulsively readable.

I have mixed feelings on this whole series so far, and this book is no exception. It’s definitely better than the first book, but probably about on par with New Moon. Both books 2 and 3 have more action, and the dynamic of the werewolf pack and the rivalry between the wolves and the vampires adds an extra dimension to the rivalry between Edward and Jacob for Bella. Toward the beginning of the story, Edward was a bit too much of a parent to Bella, but that was short-lived. Bella continued to be whiny with him, and her behavior with Jake was completely inappropriate (who holds hands with a guy friend when she has a boyfriend and thinks that’s okay?!) But aside from that, Bella was likable enough for maybe the first 2/3 of the book. Identifiable, at least.

But then she suddenly becomes insufferable, when (spoiler alert) she decides she’s in love with BOTH Edward and Jacob. I could *maybe* have understood if she claimed to be confused about her feelings (even though one of them is a paragon of selflessness while the other is cocky, whiny, manipulative, and immature). But no–Bella claims that she knows exactly how she feels, and she is actually in love with them both… she just happens to love Edward better. I really can’t understand what either guy sees in Bella. Her mother says that she was “born middle-aged,” but I can’t think of a single scene in the series so far that demonstrates her maturity.

I kept reading, though. Still. I don’t know why, considering my disgust with the protagonist. But I will give it this: even though this series is primarily a romance, it does not glorify sex. There’s discussion of it, and given the main subject matter it can hardly help that. But it still remains clean.

I finally stopped reading maybe 1/4 into this one. I enjoyed Bella and Edward’s wedding, even though Bella’s extreme aversion to all things marital seemed a bit unprovoked (but she tends to have strong negative reactions to nearly everything.) I could even buy her getting pregnant with some sort of incubus creature eating her from the inside, though that seemed pretty hokey.

…But then Edward and his family start trying to abort the child to save Bella, and she’s not willing, so Edward tries to get Jacob to convince her–with the enticement that she can have children later with Jacob instead, if what she really wants is children. Like they’ll just share her. I get having a love triangle for the sake of tension, but after she’s made her choice and married Edward, now the plot doubles back to Jacob again, and they’re going to be swingers? That’s just a whole new level of weird, to the point where the story was no longer enjoyable to me. I don’t need to finish it that badly.

No rating (did not finish)