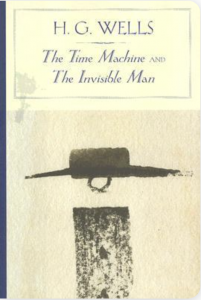 Classics, in my experience, are either fantastic or dreadful, and rarely in between. This pair was the rare exception. Both of them were a bit on the boring side. This was probably due to lack of characterization, and slow pacing, to my modern sensibilities. Both felt rather episodic. The only reason I persisted was because both stories had unique premises, as well as a morality tale which intrigued me.

In The Time Machine, I couldn’t quite tell what the moral was, though. The time traveler spends the bulk of the story some 80,000 years in the future. There, humans essentially resemble little doughy smurfs, the way Wells describes them. They are fully grown, but like weak, stupid, sweet little children. They frolic in the flowers and with the butterflies, live communally, do no work, and know no difficulties or resistance. In fact, they live at a time when mankind has long since evolved to the point where he has solved all his problems: there are not even any weeds or annoying bugs anymore. But the time traveler has the distinct impression that, because these creatures lack all grit, determination, and mettle, this is the sunset of humanity. They won’t live much past this age, he believes. I kept trying to figure out as I read what his politics were; it felt like he was trying to make a point about his own day and age, but I don’t know enough about the circumstances in which he lived to riddle out what it was.

In The Invisible Man, the moral was easier to identify, but he sure took a long time in getting to it. The entire tale seemed to be back story until the very end. Only then do we learn that the invisible man is named Griffin, and he is an albino as well as a genius chemist, who found a way to turn his cells invisible. (The fact that he is albino is significant, because, in Wells’ explanation, his irises would otherwise still be visible.) For about the first half of the book, he’s just a mystery, and it takes awhile for the people of the town where he’s suddenly turned up to even realize he’s invisible, since he wraps himself in garments from head to toe to fool them. Then he stumbles upon an old colleague, who serves as a pretext to tell his story to the reader. When he finishes his tale of discovery and of the hardships that came along with it, then he finally gets down to his nefarious plot to commit wanton mayhem and murder in order to preside over a reign of terror. After all, an invisible man can get away with anything, so long as he has an accomplice. I think the whole point of the story was to illustrate the depravity of man, if he lacks the restraints of society to keep him in check… but the moral in my opinion was poorly delivered. Nothing in the story led us to expect that from Griffin until he suddenly announced it. Prior to that moment, he just seemed bumbling and woebegone. True, he stole here and there, but that was of necessity due to his condition.

Even though War of the Worlds is another classic I’ve never read, I’m not sure I’ll continue reading Wells. Then again, I read that these were earlier works of his… maybe he got better at the craft with time.

Violence: some murders at the end but they weren’t gratuitous

Political content: probably? But I couldn’t riddle out what it was (and historical anyway)