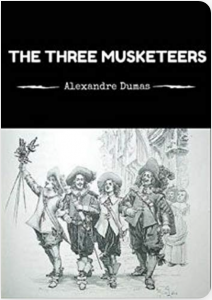 2018 review:
I read this about 15 yrs ago and remember really liking it… so why did I find it so boring now? I feel like this implies bad things about the progress of my attention span as I age…
—
2022 review:
I understand now. The first time I read “The Three Musketeers,” I read an abridged version. When I tried to read it in 2018, I attempted the unabridged, and Dumas had a tendency to be quite verbose (as did many of the classic authors, to be fair). The version I listened to this time was very abridged indeed, probably 6 hrs on audio. But because of that, the pacing really moved.

It’s odd that the title is “The Three Musketeers”–that’s misleading, as it leads one to believe that they are the main characters. Really, those three (Athos, Porthos, and Aramis) are barely distinguishable from one another as characters, D’Artagnan is the hero, really: a very young man who is all courage and emotion. He manages to challenge all three of these great Musketeers to a duel over various slights in the span of a single morning. The story tends to be quite flippant throughout: D’Artagnan doesn’t expect to survive but is hardly troubled by this. His manner so impresses the three that he promptly becomes their fourth. Subsequent intrigues follow, involving the suspicious king, the unfaithful queen, the queen’s lady in waiting, and various other high-ranking officials willing to use both information and the Musketeers as weapons against their political rivals. D’Argantan primarily gets mixed up in all this, falling in love at first sight with the queen’s lady in waiting, and then a femme fatale who was once married to one of his three companions before her true nature was revealed.

It’s a swashbuckling, almost tongue-in-cheek epic adventure, much in contrast to the very serious “Count of Monte Cristo.” I’m glad I gave it another go, but I’m also quite glad I went with abridged this time.

Sexual content: present in a fade-to-black kind of way