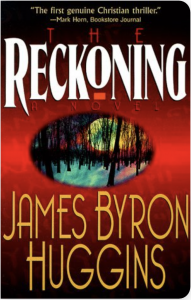 My mom read this one to me when I was probably in middle school, and for a time it was my favorite novel. I’d all but forgotten about it, but since I’m revisiting books I recall from that era of my life, decided to see if it still held up. It mostly did, though as an adult and an author myself now, I think I saw it a lot differently. The story is a thriller, which isn’t (now) usually my genre. Technically it’s considered Christian fiction, though really that was almost peripheral to the story.

The story follows ex-Delta special forces operative Jonathan Gage, who is described ad nauseum throughout the story as being practically superhuman: unbeatable, unkillable, unstoppable. Many characters, and indeed, many entire chapters, seemed to exist only to tell the reader yet again how awesome Gage is. (In retrospect, I see that this was probably why I loved the story so much. I’ve always been drawn to those superman kinds of characters.) Gage was recruited out of Delta, selected as one of the best of the best to be in a secret group called Blacklight, where they were sent by their superiors to commit sanctions on various targets around the world. But eventually, Gage started to get suspicious — none of their targets made sense to him. They were powerful but they weren’t the kinds of threats that should have required sanctioning by such a multi-million dollar, super secret and elite team as theirs. He started to create layers of fake identities for himself, stored money in various security deposit boxes all around the world and bought property way off the grid, intending to vanish as soon as he could. But he never got the chance: someone sold him and his team out, and most of them died except for him (and two buddies of his who show up about halfway through the story to help him). A priest found Gage and nursed back to health, and became like a father to him. Through the priest, Gage found God. But Gage is very much a man of action; nowhere in the entire story does he say much of anything about his faith. We just know that he’s not the man he was.

Through the priest, Gage learns of a millennia-old manuscript that a secret order has been trying to find, which reveals the identity of the antichrist. (Here’s about the only place where Christianity is important as a motivating factor, even though it’s kind of just a pretext for the action.) The order wants to learn who the antichrist is so that they can prepare his kingdom for him and just hand it to him on a silver platter, rather than waiting for him to build it himself. The priest gives Gage the clues he needs to find the manuscript before they do. Gage goes after it, but he gets side-tracked, having to save a girl named Sarah who also nursed him back to health when he was wounded in the desert, and whom they now know they can threaten in order to get to him.

I really did love the “superman” aspect of the story, even though this time around I thought it was pretty overdone… even to the point of thinking the book would have been about half as long if people weren’t constantly raving about how amazing Gage is. The fight scenes were terrific too, though the motivation for them felt a bit flimsy. Characterization could have been better. Sarah’s and Gage’s relationship is literally all about Gage and his past demons; she’s utterly fascinated by everything about him and he never shows any interest in her aside from the need to save her. They have this kind of “understood” romance, but it’s never spoken of or demonstrated, because Gage doesn’t want to get distracted. The FBI man, Kurtzman, who first hunts Gage and then ends up helping him, was probably the most complex character in the story. But, that was all kind of okay, because this isn’t a book about the characters–not really. It’s a story about an amazing warrior who meets his match, and has to keep going when he’s already past the point of endurance. And he wins in the end. That made me cheer in middle school, and it still does.

Violence: plenty, but it wasn’t reveling in the gore or anything