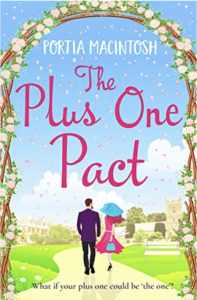 This felt just like a Beth Moran book–so the cover art was good branding, I guess. Maybe all chick lit is similar? The genre is new to me so I’m still not quite sure… but it’s like a book version of a chick flick.

29-year old Cara (and I’m noticing a theme there too: chick lit protagonists are usually late 20s, early 30s, and still trying to “find themselves”) managed to weasel her way out of being her cousin’s bridesmaid when the cousin wanted her to lose weight to fit into a very specific dress from the 1970s. But the cousin, terribly put out about it, had invited Cara’s then-boyfriend Lloyd to attend with her, and refused to rescind the invitation after they broke up. But she told Cara that she was still allowed a “plus one” if she wanted.

Cara, unfortunately, has been through every match on an online dating app in her area. When the very last man available stands her up for a date, a gorgeous man named Joe Mills, who goes by Millsy, of course takes pity on her and invites her out to an exclusive nightclub instead. Millsy later takes Cara for a makeover while he gets his eyebrows waxed… and we later learn that he’s a body double actor for various celebrities (mostly for nude scenes, it’s implied). All this was a bit of an impediment to thinking of him as a love interest for Cara, as are the numerous comments from the peanut gallery that he will sleep with anything that moves. But between this and his behavior towards Cara, they think of each other as “just friends” from the very beginning. They agree to be each other’s “plus one” for various family outings over the summer: for Millsy, this gets him off the hook from various relatives who think he needs to just get serious with someone for a change, and for Cara, it gives her a buffer from her ex, whom her family unfortunately still adores.

From there, you can probably fill in the rest of the antics. The two of them get into various scrapes, setting them up for sparks to fly. Cara develops a minor crush on Millsy’s half brother, whom he unfortunately hates. Cara meanwhile suppresses all thoughts of Millsy in a romantic way, until forced to acknowledge them… after which there are misunderstandings, conflict, and various confrontations that lead to a sweet resolution at the end. It’s basically an updated “When Harry Met Sally.”

Language: present but pretty much the way it would be in most films these days… not constant.

Sexual content: present, though in a fade-to-black kind of way

Political content: I’m trying to remember… nothing leaped out at me, though I suspect there was a little bit.