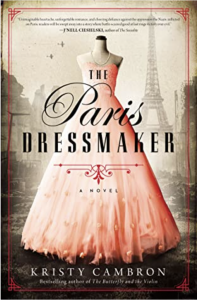 It’s possible that my opinion of this book doesn’t do it justice, because I wasn’t listening closely at all. Then again, I listen to fictional audiobooks all the time, and usually either like them or lose interest and give up. This one was strangely in between… I had a vague overall impression the action without really following all the details, probably because the story didn’t grip me enough to warrant my full attention.

The story follows two Parisian women during WWII, and I never did figure out the relationship between them. I don’t think there was one–it was just a parallel story. Sandrine is married to a resistance fighter, and the couple has a little boy, Henri. Her official job as far as the Nazis are concerned is to catalog artwork confiscated from the Jews for Hitler’s collection, but she searches for information for the resistance along the way. Meanwhile, one of the high up officers takes an interest in her–and she has to put him off as best she can without outright rejection. This becomes more difficult when her husband turns up in secret, and Sandrine becomes pregnant with their second child. The Nazi officer believes she is the paramour of one of the other officers.

Lila was an apprentice to Coco Chanel, and a very talented dressmaker in her own right. Prior to the war, she fell in love with a well-to-do Jewish man named Rene, who seemed to jilt her and then vanish. Lila believed that something she said to a thoughtless friend led to his death and that of his family–and this part confused me, since it seemed like there were segments told in flashback. Again, I wasn’t paying enough attention, I suspect. Rene appears again as a member of La Resistance, and Lila’s talents as a dressmaker are turned toward helping her infiltrate the Nazi elite. But of course, this comes at great personal peril.

I’ve read so many WWII books now that I can get the overall emotion of them even without attending to all of the exact details. They’re always stories about courage, good vs evil, harrowing encounters, and focusing on what truly matters.

Violence: it’s war, but nothing gratuitous