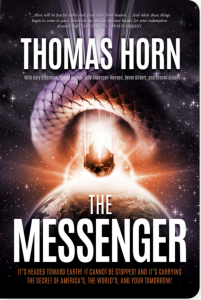 This was a hard book to rate, because certain parts were an easy 5 stars, while other parts left me muttering in confusion, “Wait… what?”

The book starts with the cover postulate: there is an asteroid headed to earth called Apophosis, destined to hit in April 2029. Horn speculates that this is the biblical Wormwood described in Revelation (and then he tells you why he thinks so). It if is, that means that April 2029 will be mid-tribulation. Calculate backwards 3.5 yrs and, if he’s correct, that puts the beginning of the tribulation around October 2025.

With that jaw-dropping hook, he then launches into a very in-depth analysis of the Jewish feasts. It’s fascinating, and some of the insights he pulls out were equally astounding. (For instance: I had never heard before that the way the Passover lamb had to be prepared to prevent breaking any of its bones required one wooden stake driven up and down through it, and the other across its arms… in the shape of a cross.) He went way out into the weeds on some of it, and while I rarely saw the connection to the asteroid, it was fascinating enough that I didn’t really care.

Then at some point he changed gears and started talking about the World Economic Forum, the Great Reset, and prophesies of the last pope. From there he went into Prince Charles’ connection with the WEF, and — while he backed all of his points well — I started to wonder about the point of the book. It felt more like a series of unrelated subjects, aside from their shared eschatological focus.

I don’t know what to think about end times theological speculations, anyway. Jesus Himself said that “no one knows the day or the hour” (Matthew 24:36) of the end–not even Him, but only the Father. Then again, He also gave His disciples an entire discourse on how they could recognize that the end was near (Matthew 24), so clearly He didn’t mean for us to have NO idea. Maybe the meaning there was literal — no one knows the DAY or the HOUR, but we can get the year or even the month right? But, the early Christians were certain that Jesus would return in their own lifetimes. Apparently the Crusades in the Middle Ages were partially inspired by the expectation that the end was near. In Isaac Newton’s day they thought the end was eminent. I’m sure nearly every believer thought Hitler was the Antichrist at the time. Apparently there were even believers who suspected that Kennedy would come back from the dead (he was shot in the head, after all) and become the world’s rallying point. Seems every generation speculates that theirs is the one. But, someone will have to be right sometime, right?