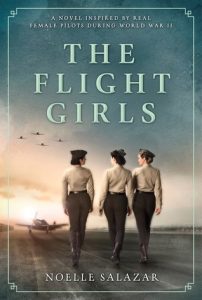 This story follows Audrey, a female pilot during WWII whose job it was to test planes which would be given to the men fighting in the war. She’s a well-to-do Southern belle who nevertheless longs for adventure, and for rather flimsy reasons, has sworn off men. Of course this doesn’t last — in fact, a good chunk of the book is spent mooning after first Lt. James Hart, and then once he is apparently out of the picture, Carter enters to keep the romantic tension alive. Probably the first 2/3 of the book is really a romance that’s merely set in WWII. Audrey’s protests against love and insistence that James is just a friend when it’s absurdly obvious he’s more stretches belief. There are also episodes of adventure too, though: Audrey and James meet in Hawaii and are there at when the Pearl Harbor attacks occur. Audrey loses a number of friends to various flight accidents. And later, when James is missing in action, Audrey takes it upon herself to do everything in her power to find him.

The story is engaging, despite some weak character moments that seem to have been fabricated for the purpose of perpetuating the tension.

Sexual content: one episode of premarital sex, but not gratuitous

Political content: it’s historical but I do detect a few minor political agendas. Nothing too in-your-face, at least I didn’t think so.

Violence: it’s war, so present but not gratuitous