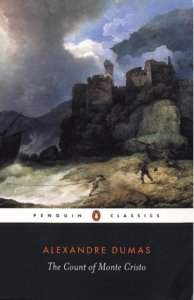 I read this many years ago, and gave it an easy 5 stars then as I recall… but, I read a paper copy rather than listening to it as I did this time, and I also read an abridged version the first time, whereas this time I listened to the entire unabridged version. Even so, it started off as quickly as I remembered, plunging me right into the story of Edmond Dantes at the height of his good fortune. He gets to enjoy it for all too short a time, as this is just the exposition. Three scoundrels conspire against him, during the time of the French Revolution, and he is condemned as a Bonapartist and thrown in the dungeon of the Chateau d’If. There he traverses all the emotions one might expect over a period of several years, of hope (knowing his innocence) and eventual despair, though he’s still ignorant of how he ended up in such a predicament. I wonder of Stephen King got the idea for “Shawshank Redemption” from “Monte Cristo,” as Edmond’s deux ex machina moment comes in the form of an elderly Abbe whose ingenuity enabled him to use what little tools he had available to him in order to dig himself to freedom–only to miscalculate and find that he had tunneled into Edmond’s cell instead. The Abbe is quite superhuman, not only for this feat but also for his encyclopedic genius in nearly every art and science known to man. He becomes Edmond’s tutor in the long subsequent years, training him in the confines of the dungeon to become an elegant and eloquent man of the world. He employs his brilliant mind in helping Edmond riddle out the secret of how he had been betrayed, and by whom. The Abbe also happened to have become privy to the secret of the great lost fortune of Cesare Borgia, and would have taken possession of it, had he not been thrown into prison before he could claim it. Then the Abbe dies, furnishing with Edmond with one final blessing: the means of escape in his shroud, posing as the dead man.

It’s only once Edmond recovers the fortune from the deserted Isle of Monte Cristo, styling himself as the Count of the same, that the unabridged version suddenly became quite apparent. Edmond’s elaborate revenge plot against the three perpetrators, plus one passive bystander who didn’t bother to help him, requires him to create multiple aliases. Several of the former perpetrators are now known by alternate titles as well, which made it hard to keep track of everyone. Also, there’s very little characterization, so I couldn’t use personality to keep the characters straight either. Eventually I had to go and read a list of characters from Spark notes to figure out who was who and how they were all related to each other–and it was much easier listening from that point on.

Monte Cristo (as he was called from the time he left the dungeons on, for the most part) suddenly becomes almost god-like from the time of his reemergence into society. He’s wealthy beyond anyone’s wildest dreams, he seems to be omniscient, perfectly worldly and wise in every way, and he considers himself an avenging angel, in the place of God. One wonders how the clueless Dantes could have become this all-powerful, all-knowing, invincible being… but we’re supposed to take it that the Abbe conferred all this and more in those brief years, with the aid of nothing but his formidable intelligence and memory. Even the narrator seems to believe in the absolute righteousness of Monte Cristo’s cause until the very end, when Monte Cristo himself begins to wonder if he’s gone too far. At least that.

The one family that Monte Cristo endeavors to be kind to is that of Morrel, his former boss who fought in vain for his release. Interestingly, Morrel himself dies at some point–I hardly remember when, as it was kind of a non-event–and from that point on, it’s mostly his son Maximillion whom Monte Cristo takes under his wing. Largely he tries to undo the irreparable harm that might have come to Maximillion in collateral damage, had Monte Cristo’s own revenge plot against one of the conspirators come to fruition. The way he goes about this, though, really suggests that Monte Cristo is both omniscient and omnipotent: he makes promises that no human could possibly keep, withholds information “for Maximillion’s good” that seems unspeakably cruel in the moment, and rationalizes that it will make him better appreciate his blessings later for having gone through such unnecessary misery–really as if he were in the place of God, to make such determinations (not that I think God does that sort of thing either, but some do, and evidently Dumas was one of them). Also, at the risk of a spoiler, Maximillion’s response on multiple occasions when it seems that he won’t get the woman he loves,  for various reasons, is to threaten suicide. Really?! And nobody thinks this is extreme enough to rebuke him for such folly? This was also one of my major complaints with the “Twilight” series, though I guess it’s been a literary theme for quite some time.

My most recent memory of the story was also from the film version starring Jim Caviezel, so I was expecting the story to end the way the film did. It decidedly did not… and for once, I actually think (rather emphatically) that the film ending was better than the book’s. ***Spoiler alert*** In the film, even though Edmond’s fiancee Mercedes never stops loving him, she marries Fernand, not realizing that he is one of the conspirators against Edmond. She does this believing that Edmond is dead, or as good as dead. So far, all this happens in the book as well. But in the film, her son Albert turns out to also be Edmond’s son as well, not Fernand’s, and when Edmond takes his revenge, he gets his family back. In the book, even after his revenge and knowing Mercedes still loves him, Edmond lets her live out the rest of her life alone–I guess the implication is that he can’t forgive her for only waiting for him for a mere year before marrying his enemy, even though she didn’t realize that he was the enemy (and he was still imprisoned for another 13 years after that anyway). So instead of Mercedes, Monte Cristo ends up with a slave girl he’d “adopted”, whom he’d thought of as a daughter until almost the very end when he realizes she loves him. Not very satisfying.

So the broad strokes plot is fantastic, but at least in this reading, the details were less than perfect, in my estimation.