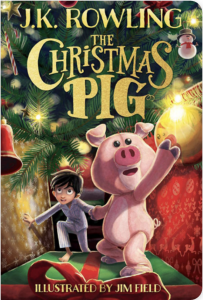 I’m so glad that JK Rowling is back to writing children’s stories. (Tried the Robert Galbraith stuff, and… no. Way too gratuitous in almost every way.)

One of the things I love about Rowling’s style is how effortless and yet complex her characterization is. She’s a master of showing, not telling, and communicating in as few words as possible the essence of a character’s emotions. I was concerned she might be putting this skill to depressing use in the set-up of this story, though. Poor little Jack finds himself in the midst of his parents’ divorce, with no one to comfort him but the stuffed pig he’s had since he was tiny, and could only call it “Da Pig”–so his name is DP for short. He makes friends at school with a cool older girl named Holly, who is kind to him until they discover that Jack’s mom is going to marry Holly’s dad. Then, suddenly, Holly hates Jack. A classic step-sibling fight escalates until Holly throws DP out a the car window on a wintry Christmas Eve, and it appears DP is gone forever. When Jack’s grandfather can’t find DP, Holly feels bad and buys him a new pig just like DP, but of course the replacement is nothing to him. Jack is furious and devastated. But then his toys come to life on Christmas Eve night, and the real fantasy story begins. (Finally.)

The new pig, later dubbed Christmas Pig, or CP for short, teaches Jack about where lost things go. While their “bodies” are still wherever they were when lost in the real world, their “essences” go to a series of purgatory-like holding stations according to how long they’ve been lost, how important they are to their owners, and whether or not they’re still findable in the real world or whether their “bodies” have been destroyed. On Christmas Eve night, the most magical night of the year, Jack himself can enter this lost world and search for DP, and try to bring him home again. With CP’s help, he braves all the various dangers of this underworld of things to find his best friend and bring him home. But along the way, he learns a lot about his guide, his stepsister, and himself.

The same emotional trappings could be translated to a great love story in a different context. This one is heartwarming, and not nearly as dark as I thought “The Ickabog” was–which is good, for a kids’ story.