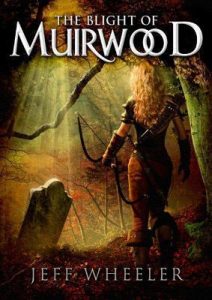 I still really enjoyed reading this one as I have all of Jeff Wheeler’s books, but I had a few more insights into why I have such a hard time following what’s going on: perhaps this is typical of high fantasy (which I almost never read), but many made up objects, titles, cities, and names are used on a regular basis and are never actually defined. I never noticed this before because the context makes me feel like I know what’s going on as I’m listening… yet then when I try to recount the plot to myself, I can’t. It’s sort of like following a lecture just well enough that you feel like you understand in the moment, but then when you walk away you realize you don’t actually remember what was said. This isn’t a criticism necessarily, it’s just a stylistic feature that I couldn’t put my finger on before.

I also had a few more mixed feelings in this one, from a religious standpoint. In previous books, I felt like all symbolism represented indisputable wisdom. In this one, I felt like it was specifically an allegory of the Mormon faith. I’m not Mormon, but I know just enough that I could recognize where certain aspects of the maston test and beliefs in the story paralleled Mormon theology. That’s not exactly a criticism either–in a way it was kind of fascinating to read between the lines and learn what a different faith (likely) believes by inferring it from its allegorical representation. It’s just that as soon as I felt that the morals espoused in the story deviated from my own beliefs, I began to feel like an outsider looking in, rather than a participant in the story, if that makes any sense.

I did really enjoy the further development of the relationship between Colvin and Lia, though. There were some surprising twists at the beginning, but I’m glad that it came back around at the end. That part was satisfying. I do intend to finish the series.