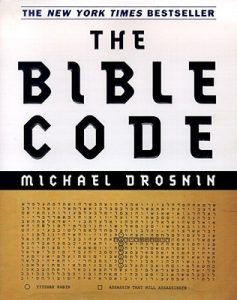 Very interesting concepts. Drosnin did not discover the Bible Codes he describes here; he’s a reporter (and an atheist one at that) who stumbled upon the discovery via a computer program discovered by a Jewish rabbi. He then cross-referenced it with numerous mathematicians who could not disprove it. (Incidentally, Isaac Newton was convinced such a code existed, and spent more of his time searching for it than he did on any of his scientific theories. But as Drosnin points out, perhaps it was time-locked; Newton could not have found it because computers had yet to be invented.) Through the code, which used some of the same code-breaking techniques employed during WWII (and probably far beyond) such as very complex skip sequences and such, he found prophecies of major world events which did indeed occur. Still he was skeptical, until he encountered the prediction of the then-Israeli prime minister’s assassination. He happened to have a connection to the PM (Rabin), and warned him of the potential danger. Rabin ignored the warning, and he was assassinated right on schedule. After the fact, Drosnin saw that the name of Rabin’s assassin was in the code too–they just hadn’t known to look for it beforehand.

This made a believer (in the code, not in God, strangely enough) out of Drosnin, but it sent him into the tailspin question posed by the Oracle to Neo in The Matrix: “What’s really going to bake your noodle is, would you still have broken it (the vase) if I hadn’t said anything?” In other words, now that we know about potential dangers, can we do anything to change it? Thus enters physics concepts of determinism vs quantum physics. As Drosnin and those who knew the code and had the program did more and more searches, they encountered a number of predictions that had yet to occur. Some were very specific, and did not happen… but those predictions also included phrases near them like, “delayed” or “will you change it?” or multiple potential years for said event to come about. Most notably, he discovered years of threatened nuclear war in the Middle East which might lead to Armageddon — but those years were 1996, 2000, and 2006. Were there other potential years as well? Was crisis effectively averted by choices made by those in power (as a result of knowledge about the code or otherwise)? I was most struck by one such prediction from 1996, when Israel’s Netanyahu was to go and visit a neighboring world leader on Tisha B’Av, or the 9th day of the Hebrew month of Av. (Incidentally this date twice marked the destruction of the Jewish temple: once by the Babylonians in 423 BC, and once by the Romans in 70 AD. Traditionally it’s also the date that the 12 spies returned from the Promised Land with an evil report, leading to 40 more years of wandering in the wilderness.) The date is considered cursed by the Jews, and they observe it with fasting and prayer — so it seemed strange to me that Netanyahu would have chosen an important meeting on that date. According to the code, there was a threat that Netanyahu would be assassinated that day, an event which would lead directly to nuclear conflict and the End of Days. But, by happenstance, the other world leader was ill, Netanyahu delayed his trip 10 days, and later those with access to the program saw the word “delayed” across the date of the visit. Nothing happened, of course. Could such a small occurrence have changed world events? As Drosnin pointed out, WWI began with an assassination, which almost didn’t occur–Archduke Ferdinand’s driver turned down the wrong street, they encountered their assassin who had missed his opportunity earlier that day and was otherwise on the point of giving up, and the rest is history.

I’m intrigued by the concept, bottom line. I hold the Bible as the inerrant word of God, and believe every word is there for a reason. There are no extraneous details. But if that goes for the text as written, could it also go for the structure of the text, too? If it did, though, what would be the reason for it–unless it were possible for those of us with access to its future warnings (after the invention of the computer, and the discovery of the code) to use that information to our advantage?

Political content: none (no agendas I could discern, anyway)