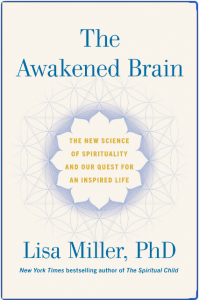 I don’t entirely know what to make of this book.

It was recommended to me by one of the founders of Pray.com to describe the importance of spirituality to mental health, and it did indeed make that point, from a scientific point of view. Yet it also blended data from large-scale studies and imaging demonstrating patterns of the brain awakened to spirituality with the author’s own spiritual experiences–and these were what confused me a little. I don’t doubt her experiences, and the coincidences she called “synchronicity” probably were God speaking to her and guiding her (though the author doesn’t really attribute these things to God per se, nor to any one cognizant entity). We’ve all had experiences like this, if we’re aware enough, I’d venture to say–and so, I think, would she.

At the same time, using such experiences as guidance I believe is fraught with danger. The book is intended to be spiritual, not religious, and supports any form of spirituality as a path to the benefits found in their studies, which I can well believe. While I believe that Jesus is THE way, the truth, and the life, I’m also reminded of C.S. Lewis’s “The Last Battle,” when servants of Tash found that they were in fact serving Aslan all along, though they called Him by a different name. I’m sure that we’ll be surprised by some of the people whom God counts as His own, in the end (and some whom He doesn’t. Scripture tells us as much.)

Miller’s perspective, though, doesn’t seem to account for the possibility of any spiritual malevolence that might have access to the exact same kinds of physical guidance, or a person’s own distorted (or even evil) worldview taking moments of synchronicity and drawing harmful conclusions. I’ve heard, and probably we’ve all heard, plenty of stories exactly like this, where someone makes a terrible life choice because of a coincidence that seemed like spiritual guidance. I think this is the very reason why, since the Holy Spirit came, His leading and scripture itself are the primary way God leads His kids. It’s the only thing that can’t be counterfeited. Sure, God can use the physical realm to get through to us, and He does sometimes (I believe on rare occasions, and usually for those who don’t have the Holy Spirit already). But so can Satan. And then there’s the complication of our own confused minds, which can invent meaning out of nearly anything to suit our own preconceived ideas. (I did a podcast on this topic, sort of, on my other podcast, Christian Natural Health, here.)

So while the examples she gives in the book are all beautiful, they seem like cherry-picking. Using anomalous events and whatever thoughts pop into one’s mind as one’s primary means of guidance for major life choices seems potentially very dangerous.