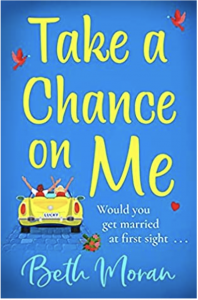 My least favorite Beth Moran book yet. She still hooked me early on, such that I raced through the book… but as the story went on, it was increasingly cringe-inducing. And also a bit gimmicky and far-fetched.

The story follows both Emma and Cooper, separately… sort of. Emma is the main character, the eldest of five sisters and the only one who is still single. Three of her sisters are married, and her youngest sister, Bridget, is her roommate and engaged. Bridget is a post-doc in psychology, and finds herself spearheading a blind *marriage* project begun as a bet between two professors with a personal vendetta. Meanwhile, Cooper is Bridget’s research partner. He’s been madly in love with her for years, but she has no idea, since she’s been with her fiance forever.

If it sounds like Bridget should be the heroine of the story, that’s really how I felt too. Emma is almost a vehicle, except Moran made her the viewpoint character. So we sympathize with Emma, not Bridget. As the sympathetic 33-year old spinster, tired of always being alone, Emma signs up for Bridget’s project. Meanwhile, hoping to get over Bridget and also to marry into Bridget’s wonderful family, Cooper signs up too. So Cooper ends up married to Bridget’s sister. What could go wrong, right?

***Spoiler alert*** I had hoped, given that Emma is the viewpoint character, that she would still get her happily-ever-after. That somehow, Cooper would fall in love with her instead. But, alas, the story ends how you’d expect. Our heroine devastated, overlooked yet again, and her relationship with her sister destroyed for at least a year. Then eventually, Bridget and Cooper get their happily-ever-after. We’re glad for Cooper, but Bridget was never really as likable a character because through Emma’s eyes, she always felt like a rival. The guy Emma was really attracted to for the whole book does pursue her in the end, but for unclear reasons, Emma turns him down. (Was this a “not everyone needs a man” theme or something? That’s a fine theme in its place, but it’s not why we read chick lit.) I guess at least it was Emma’s choice, but geez, what a let-down all around!