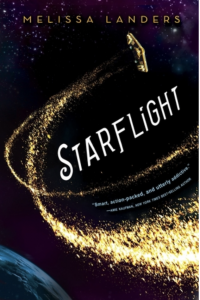 This was a fun read! It reminded me a lot of the Lunar Chronicles, and particularly of Cinder.

Solara is an orphaned teenage mechanic living in an intergalactic universe – hence the connection in my mind to Cinder. In this world, misdeeds are tattooed across the knuckles so that all the world can see them; Solara trusted the wrong boy in the past, and now finds herself marked. This dims her already poor prospects. She was a great student, but was expelled from flight school as a result. Then in a desperate situation, she finds herself indentured as a servant to the boy in her class who hated and mocked her the most. But she needs her passage paid for, so she puts up with it, distasteful as it may seem.

Doran, said boy turned master, starts out a miserable rotten human being, so it takes a good deal of suspension of disbelief to buy that he’ll eventually become the love interest. People rarely change that completely, that fast. The inciting incident of their adventures together is when Doran threatens to drop her off-world at a place where she’s very likely to starve to death or be sold into prostitution, which it’s kind of hard to forgive him for later. A semi-deux ex machina moment saves Solara from this fate: she turns out to have the perfect weapon on her for just such an eventuality, one that happens to wipe Doran’s memory. But, Solara realizes, in order for her escape plan to work, she’ll have to take Doran with her.

While he’s thus incapacitated, Solara convinces him that he was the servant and she the master. They barter passage onto a ship of misfits that reminds me intensely of “Firefly” (another reason to love the story). What follows is a madcap romp across the universe with ever-increasing stakes as Solara, Doran, and the crew accumulate enemies. Meanwhile, of course, Solara and Doran fall in love. Plot twists worthy of a soap opera top it all off, but the prose is so lighthearted that I’d probably have gone with nearly anything by the end.