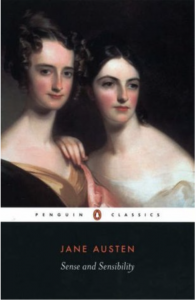 One of Jane Austen’s best!

This time I listened to the version narrated by Rosamund Pike, who did a wonderful job. I hadn’t read it in a long time, though I remember the film version quite well. I just love how Austen manages to create such vivid characters, trusting the understanding of the reader to intuit everything she doesn’t say about them. She never spells out their defects for us–she just shows us their true motivations under the veil of an invariably polite society. Such a dry wit she had.

Eleanor is the sister with whom I’m sure Austen herself identified, and the one with whom the readers will identify by the way she is presented. She and Marianne and their mother find themselves in dire financial straits upon the death of their father (along with their younger sister Margaret, who so rarely comes into the story that I forgot they even had another sister). Their father actually had money, but because of the rules of society at the time, their older half-brother John inherited all. On his deathbed, their father entreated John to provide for his sisters and wife, but John’s stingy and selfish wife Fanny persuades him not to, and he’s under her thumb enough that he does as she wishes. Because of this, they have very little, which makes neither sister a very eligible marriage prospect.

So sets up the dynamic: money always stands in the way of romance in Austen novels, as men too stood to elevate their fortunes and positions by marriage. Fanny’s brother Edward falls in love with Eleanor, but his mother will not hear of it… and as Eleanor later learns, this isn’t even the biggest obstacle between them, as Edward betrothed himself in his youth to a girl still more impoverished than herself, though he no longer loves her. Eleanor eventually meets the girl, Lucy Steele –and from the film version, I’d forgotten that Lucy was quite so hatable as she appears in the book. Conscious that Eleanor might have a claim on Edward and jealous of it, Lucy affects to be Eleanor’s friend, when in reality she only intends to drive the metaphorical knife between her ribs by imparting confidence of her own superior claim upon him. It’s so incredibly catty–which is the genius of Austen’s writing. What she doesn’t say is so abundantly clear, she would have detracted from the effect to say it in so many words.

Marianne, meanwhile, is the sensibility to Eleanor’s sense. She’s all extremes, and the folly of this is ultimately visited upon her in her near-death from an excess of psychological distress. She falls in love with a scoundrel (as happens to nearly all of Austen’s heroines at some time or other, before they can truly appreciate their real prince) and pines away for love of him until she almost dies for real. Only then can she appreciate the man whom her idealism had originally taught her to despise, but whose character was far superior.

My primary complaint of all of Austen’s novels is the way she skips over the climax in generalizations. We never get to see the actual proposal or aftermath of it! It’s just mean, really, after all that build-up.