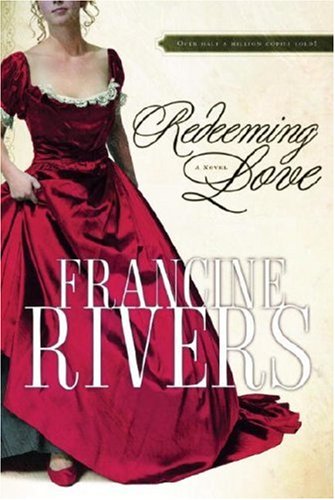 I read this once before in college, and at the time I thought it was heavy-handed in its overtly Christian message, cheesy, and unrealistic. I reread it now, though, because so many other people regarded it as the standard for romantic fiction. One thing I’ve noticed about a lot of romance stories is that they’re addictive while they last, but they leave me feeling empty when they’re over–needing another ‘fix.’ This one did not. I felt satisfied and uplifted at the end.

The story is sort of a retelling of the book of Hosea in the Bible: God commands his prophet Hosea to marry the prostitute Gomer. He does, and he loves her, but she keeps running away from him and going back to prostitution. Each time he goes back and redeems her again, bringing her home, and each time she breaks his heart. It’s meant to be a picture of God’s love for Israel (and later, His church): God is Hosea, and Israel is Gomer, constantly “prostituting” herself out to serve other gods. God’s love for her is jealous, like a husband, and He wants her all to Himself. But each time she betrays Him, He forgives her and accepts her back.

In “Redeeming Love,” the prostitute is Angel, and the man who courts her is Michael Hosea. It’s not a perfect analogy because in the story, Michael actually tells the story of the book of Hosea to Angel, and God himself is a character in the story, leading Michael to do what he does to save her. I recall thinking that Michael was too perfect to be believable when I read it in college, but somehow I didn’t feel that way this time around. He’s pretty perfect in his actions, but we see his internal struggles when he talks to God. Angel is hardened and nasty to Michael for quite awhile, but this makes perfect sense, given what she’s been through. Her fear of falling in love with him is so well done, and so believable: given how much she’d been hurt, of course she’d be terrified of vulnerability again. Between episodes of her running away, the story tends to drag just a bit, but it’s important to establish some of the relationships with peripheral characters. I took slight issue with the fact that several characters parrot scripture to explain their actions, though–I understood what the author was trying to communicate, but nobody actually talks that way (or if they did, they’d seem fake.)

Ultimately, though, I think what made this story different from other romances is that the romance between Michael and Angel wasn’t the be-all and the end-all. Michael introduced Angel to God. *He* was the point–and then He ultimately leads them back together, too. Other romances tend to place an untenable burden on another human being to complete and fulfill the characters in one another, and there’s something in us that knows that’s not possible. Hence that emptiness, the drive for another ‘fix’ when the story is over–like we’re looking for something we know can’t be found in real life. It leaves a sort of ache. Once that burden for ultimate fulfillment in one another was removed, though–once Michael was no longer expected to ‘redeem’ Angel on his own–they were free to find such joy as could be found in one another. The desire for perfect, redeeming love was also fulfilled–but from God.