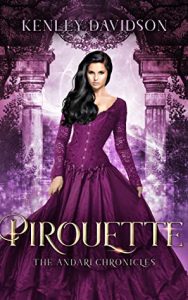 I still enjoy this series of fairy tale retellings: they are clean, they are creative, the plots are unexpected, and the characters are identifiable and likable for the most part. I think this was probably my least favorite thus far, though: it seemed to drag a bit, and it lacked that un-put-downable quality of the others.

The story is a retelling of the Twelve Dancing Princesses, a fairy tale I hardly knew before, though Davidson’s retellings are so loose that I don’t think it probably bears that much resemblance to the original. It is helpful to read the books in order, as a few characters introduced in “Traitor’s Masque” appear in this one. Rowan, the rejected would-be crown prince of Andari, flees to a neighboring kingdom with the bizarre culture that requires all marriageable women, and particularly marriageable princesses, to dance. They also have the quirk of both harboring and despising magic. Their king, called the malek, has thirteen daughters, but he pretends the thirteenth does not exist, because her existence shames him. Ilani was at one time his favorite, but then when she danced before him at seven, she unknowingly released her magic. For this she should have been killed, but instead her legs were mangled in punishment, and she moved through the palace as a ghost ever since. When the man responsible for Ilani’s punishment is named the malek’s heir, and would-be husband, the twelve princesses refuse to dance for his ceremony. The malek is furious. Rowan, eager to exploit the situation to his own ends, quickly ingratiates himself with the malek and proposes a contest: the one who can tell the malek why his daughters refuse to dance shall be his next heir instead.

Meanwhile, the Andari prince sent spies to find out what Rowan is up to. One of them was a right-hand man and a playboy from “Traitor’s Masque,” Kyril Seagrave. He and another member of his party, Brenna, have a very contentious relationship, which hinders their ability to get their job done Later it turns out to have a good, if convenient, explanation. The rest of this party were not at all memorable. In the process of his role as spy, Kyril encounters Ilani and learns about the cultural intricacies that have kept her prisoner–and, of course, falls in love with her.

Some aspects of the story seemed forced to fit the fairy tale, and others seemed convenient or a little too tidy. I liked the characters, but I didn’t truly identify deeply with any of them. Still, I really enjoy the series overall and intend to read on.