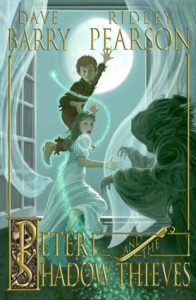 I’m so happy to have discovered this series! (Jim Dale as the narrator is just so amazing, again because of the Harry Potter connection I’m sure… I wonder if I’d have liked it so well had it been narrated by anyone else.)

We rejoin Peter and the Lost Boys on Neverland. Molly has gone home, and in addition to the usual villain of Black Stache (now called Captain Hook after his encounter with Mr. Grin the Crocodile), a much more sinister villain takes the stage: Lord Umbra, a name which means shadow. That’s exactly what he is: a creature of shadow who steals people’s shadows (essentially representing their souls, as he controls them from that point forward). He’s one of the Others, those who are against the Star-Catchers, and seek to find the Star Stuff and use it for their own diabolical ends.

Peter learns that Lord Umbra is after Molly and her family, which forces him to leave the Lost Boys behind (in the clutches of Captain Hook!) and fly to London to help her. While there, he meets George Darling, who obviously will turn out to be Molly’s husband and Wendy’s father, though at this point Peter still has a crush on Molly (and she on him). The love triangle between the three of them is really sweet and innocent, made more complex with the addition of Tinkerbell’s jealousy, since she didn’t exist until the very end of the first book.

The adventure was everything you could wish for: there are pirates, fairies, flying, soul-stealing, and a trip to both the Tower of London and to Stonehenge during a lunar eclipse… with a perfect happily-ever-after. I can’t wait for the next one!