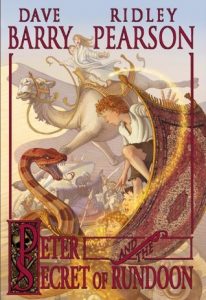 I still really enjoyed this tale, though it did feel a bit like more of the same… it’s starting to get hard to differentiate one book in this series from the next. This might have been because Lord Umbra was also the villain in this book, though he significantly upped the ante: this time his goal was literally to reverse the Big Bang, making it so that in the blink of an eye, the entire history of the universe would reverse, and the world never would have existed in the first place. That’s a pretty darn ambitious goal! I also enjoyed the fact that Captain Hook and the Starcatchers had to work together in this one, and back on Neverland, the rest of the pirates and the Mollusk warriors also joined forces against a much more fierce tribe of natives. Molly and Peter team up again, and the love triangle between Molly, Peter, and George resumes, though it’s clear now that Molly is growing older while Peter is staying the same age. Molly irritated me a little in the last book, but more in this one, when she stubbornly refused to listen to her father’s good counsel in order to perpetuate the plot. I don’t think I’ll be too sorry if we skip ahead in time in the next book and finally introduce Wendy, sure to be Molly’s and George’s daughter.

Still a fun story, though at this point I may or may not read on.