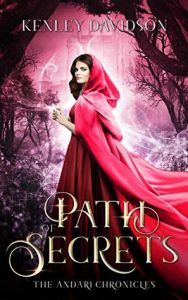 This whole series is like the literary equivalent of a bowl of pasta — empty calories, but tasty comfort food nonetheless. It’s got a little bit of everything: adventure, magic, romance, intrigue, and a sappy happily-ever-after.

This one was a very loose retelling of Little Red Riding Hood… but since that story is actually quite short, the author had a lot of gaps to fill in. The role of Red Riding Hood is played by Batrice, a sarcastic former actress who thinks she’d like to become a spy for the Andari crown. But before she can do so, a letter from her hypochondriacal grandmother diverts her course, demanding that she come and attend the old lady’s bedside before her demise. Batrice cannot understand why her spy mentor not only sends her, but sends her with two guards who behave quite strangely, with a basket containing a poorly behaved puppy, and with an aspiring novelist who pretends to be her maid. Along the way, they encounter an injured traveler whom they take in, multiple small personal items go missing, the carriage is vandalized, and Batrice  wonders what’s really going on. The mysterious injured traveler, Jamie, becomes the love interest–but is he also the “wolf”? (At least that’s what I was wondering for most of the book.)

The climax of every book in this series is always a little chaotic and topsy-turvy, with reveals coming so fast and furious that I’m not sure if Davidson planted seeds for them earlier in the story, or if she’s just making up whatever comes into her head at the time. This book’s climax was even more that way than most, introducing an entire conspiracy and characters of whom Batrice was entirely ignorant. But I didn’t really mind, because I wasn’t all that invested in the mystery anyway. While I enjoyed every book in this series, I also never felt that I couldn’t put it down or had to know what happened next. They’re great for light bedtime reading.