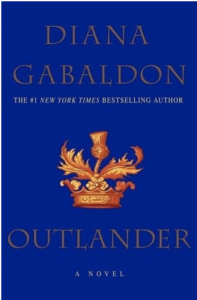 I never would have thought to listen to this book, had Audible not suggested it to me, as I’m not a big romance novel fan. But I do love an adventure story with an interwoven love story, especially when there’s a fantasy twist, so I thought I’d give it a try.

The quick summary: Clare is happily married in the 1940s to academic Frank Randall, and after separation during the war, they’ve come back together for a second honeymoon in Scotland, from which Frank’s ancestry stems. Clare conveniently falls unconscious at a circle of Druid stones, and wakes up in 18th century Scotland. She almost immediately meets a man who looks exactly like her husband, but turns out to be her husband’s ancestor and the story’s primary antagonist, Captain Jack Randall. She barely manages to escape him, finding herself instead thrust among Scottish clansmen–including Jamie (whose surname is in question at first). With medical skills far beyond those of 18th century rural doctors, Clare treats Jamie for an injured shoulder and garners a reputation as a doctor. She and Jamie become friends, but unlike the annoying introduction of many a romantic hero that involves blushes and obvious ogling, I only knew he would soon become more than a friend to her because they spent so much time getting to know each other. While they’re still just friends, Clare is forced to marry Jamie in order to avoid falling into Captain Randall’s hands as a potential English spy. She protests (since she has a husband she loves already, 200 years in the future) but is finally forced to give in. Their bizarre arrangement makes for a very interesting relationship progression, of deep intimacy in some areas but shyness in others. There certainly are enough external conflicts to keep the plot going, too, but by far the most intriguing are the conflicts between Jamie and Clare.

The book really had everything a book should have: excellent, sympathetic characters (rendered so much more distinctive by the talented narrator Davina Porter), perfect pacing, adventure which spans beyond the individual lives of the characters, and just the right suspension of disbelief (the reason why Clare time-traveled isn’t explained, and it really doesn’t seem to matter). I had only one complaint, but it’s big enough that I won’t read the rest of the series, and I almost stopped reading this book several times: not only is the book very sexually explicit, but as the story progresses, the practices described become increasingly sadistic and deviant, as well. I otherwise absolutely loved the story: it had the potential even to become a favorite series, if not for that. But I just don’t want that stuff in my head; it’s not worth it. (Why, oh why is it so hard to find a “clean” novel written for adults these days?!)