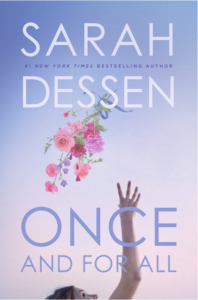 There was a lot I liked about this book, and a lot I didn’t care for, too. I’m still rounding up to 4 stars because it was so compulsively readable.

First of all, the cover and the title are quite misleading. I thought I was getting a romance about a couple who would eventually marry, but the protagonist, Louna, is only 17. The only real tie-in is the fact that she works for her mother, a world-class wedding planner. Her mom and her mom’s partner (business partner, who happens to be gay) are basically Louna’s parents, and both super cynical about love. They’ve passed this on to Louna, though that almost stretches belief–17 is too young to be that jaded, and her jaded years were well before the story begins, too. Because she did find love (I guess when she was 16): she met Ethan at a wedding. He was depicted as the whirlwind romance of her life, though she literally only saw him for one night (and lost her virginity to him). They conducted a long-distance relationship after that, intending to keep in touch, only he was killed in a school shooting. That, too, was weird. Timely I suppose, but information was withheld from the reader for too long, so that it came off like Louna just struggled with panic from excessive empathy whenever she heard about a school shooting… until we learn that that was how Ethan died.

Louna’s story with Ethan is interspersed in flashback with her present day, where she meets Ambrose, the wealthy son of a bride who is easily the best part of the story. He’s such a fantastically memorable character–annoying, super quirky, suave and utterly confident, and yet also thoughtful and kind. Some of these contradictions also didn’t totally work, though: Ambrose makes a point of dating multiple girls at once, leading to getting busted and having soda thrown in his face, and that sort of thing. Yet, apparently he falls for Louna pretty much immediately, and decides he wants to win her over. To that end (we learn later), he makes a bet with her: for seven weeks, he will have to find one girl and commit to a relationship, while cynical introverted Louna will have to date compulsively like he does, for the same length of time. Whichever of them calls it quits first, loses the bet–and the other one gets to choose the next person the loser has to date. It seems friendly enough, though it doesn’t quite ring true that Ambrose would go through all that just to force Louna to give him a chance. Still, if you suspend your disbelief on that point, the way it played out was well done.

The twist, of course, is that Louna never tells Ambrose what happened to her last boyfriend. He just assumes it was a bad breakup, and thus puts his foot in it. The way Louna reacts to this really made very little sense to me… but the event that brings her around in the end was SO perfectly believable and satisfying.

So… entertaining, but with a lot of flaws, I’d say.

Language: some, but not excessive

Violence: it discusses school shootings but without details

Sexual content: present, but only in one scene. Could’ve done without it.

Political content: pretty heavy, on the “politically correct” side