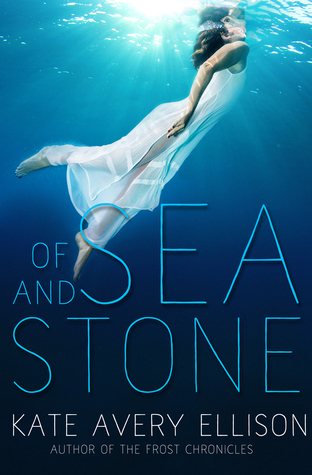 I read this one mostly on the beach in Bermuda, which turned out to be just perfect! Since the story references (and later takes place in) the lost city of Itlantis (a different spelling of Atlantis, apparently) and one of the theories of the Bermuda Triangle involves the idea that the lost city might reside somewhere within its waters, the setting really enhanced the story for me. (So, you know, try to read this one in Bermuda if you can.) 🙂

The story follows Aemi, an orphaned slave. She has a close friendship with a boy named Kit, and a contentious relationship with the (very handsome) mayor’s son, Nol. Then one fateful night when unknown raiders decimate their town and take Aemi and Nol captive. A man who looks vaguely familiar orders Aemi’s execution because she’s seen his face, though she doesn’t know what this means. A friend saves her life, and she begs for Nol’s life too, though she isn’t sure why since they hate each other. She and Nol are both sent as indentured servants below the sea, into the city of Itlantis. There are six spherical interconnected cities within the city, separated by industry. Aemi and Nol happen to be sent to the house of a kind master named Merelaus, who has a daughter who befriends Aemi named Lyssia. Merelaus tutors Aemi, and Nol is his personal assistant. Of course Aemi and Nol don’t remain at each others’ throats for long—but despite their predictable romance, it was fun to see how this author developed it (and indeed, aside from the marvelous description of her world, that was my favorite part of the story.) Once they become allies, Aemi and Nol plan their escape to the surface, and to find out what happened to their village and why. But along the way, they find that the fate of their village and trouble brewing in Itlantis might not be so separate after all.

This story strikes the perfect balance between characterization, world building, action, and plot twists. Each chapter ends on a cliffhanger, so I had to keep reading to find out what happens next! This is the first in a series, and while the story kind of wraps up at the end, there are still a lot of loose ends. It’s honestly pretty rare for the first book in a series to hold my attention well enough that I not only finish the book, but intend to read on. With this one, I want to know what happens next!