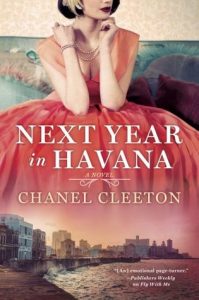 I was surprised by how engaging this was.

The story went back and forth in time, following first Marisol, the granddaughter of a wealthy Cuban refugee who fled from Cuba right after Batista was ousted and Castro took over, and her grandmother Elisa in real time as that was happening. It wasn’t a frame story, though, as each protagonist had her own plot line and character arc, though the two mirrored each other closely.

Elisa, the debutante daughter of a sugar plantation owner, falls in love with a revolutionary fighting to oust Batista. At this point I rather expected that the story would be pro-communist (or at least pro-socialist) propaganda, but it was far more complex than that, and I thought it did justice to the real history very well. Neither Batista’s nor Castro’s regime was blameless, but Pablo, her lover, did not realize what he was ushering in in Bastista’s stead. Meanwhile, Marisol returns to modern day Cuba after Castro’s death, when Cuba is just about to open up to Americans, ostensibly as a travel writer, but also to scatter her grandmother’s ashes. What she finds there is her heritage, secrets her grandmother kept from her all her life, and a romance with her own revolutionary, Luis–ironically on the opposite side from the one Pablo fought to empower, though the two had very similar ideals.

The tension between Marisol and Luis was a bit annoying and redundant, honestly, but I loved the parallel aspects of the two women’s stories, and the political atmospheres in which they unfolded. Particularly because it was told without an obvious agenda. The story did a good job of showing the complexities of both sides.

Sexual content: present, but just in two back-to-back scenes you could skip, and fairly tastefully done

Language: I think there was some but I didn’t register much of it

Violence: present given the subject matter, but not gratuitous