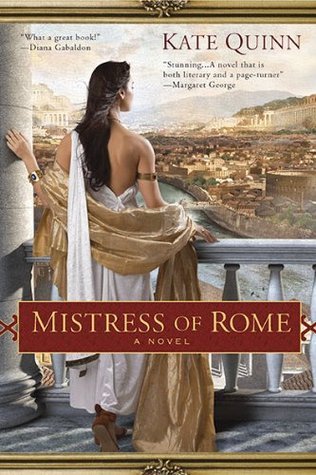 This wasn’t at all what I expected. It was a lot more graphic, and far more of a sweeping epic than I bargained for, though I definitely got sucked in.

The story jumps around to multiple characters’ perspectives. The protagonist was Thea, though she didn’t get any more “screen time” than the rest of the characters. Born a Jew, Thea is the only one of her people to survive a first century massacre. She gets sold into slavery at fourteen to the flighty, beautiful, and later downright evil Lepida. Lepida develops a crush on the gladiator Arius “The Barbarian,” and writes him letters to try to seduce him. She sends Thea to deliver them, and in the process, Arius and Thea fall in love. Jealous, Lepida sells Thea into prostitution, and Thea and Arius are separated for about twelve years. But by that time, Thea is already pregnant with Arius’s child.

Lepida, meanwhile, marries an old senator, but seduces his son, and attempts to become the Emperor Dominius’s mistress.

Thea gets sold to a kind master who allows her to learn music, and she becomes a famous singer, though she is still technically a slave. One day she sings for the Emperor, who takes a liking to her. He seems benign enough, and she becomes a favorite. But when she becomes a very distinct favorite, he has her master murdered so that he can “own” her, whereupon he becomes physically and emotionally abusive. Thea has to hide her son from him, as he is quite possessive and doesn’t like even the suggestion that she ever once belonged to another man.

So the story goes: Thea’s son is raised more or less away from her. Arius fakes his death with the help of the Emperor’s Christian niece, who tries to help those slated for slaughter to escape. Lepida, who rivals the emperor for most hatable character, continues to scheme and plot to destroy other people’s lives to get ahead herself. Arius and his son meet, and Arius trains the boy to fight, though neither knows of their relationship yet. The emperor eventually learns Thea’s secret, and casts her off while claiming her son as a new “favorite” instead. This lands him in the arena when he is only a boy–though fortunately he has been trained by the Barbarian himself. Lepida eventually achieves her lifelong goal of becoming the emperor’s mistress, but her power is short-lived. Many different characters’ lives intertwine, and while the story ends tragically for some of the peripheral characters, it’s triumphant for the main ones. Seeing Lepida get hers in the end especially was SO satisfying!

This definitely is not the kind of story I’d normally have even continued to read, because the sex and violence is so prevalent, and much of the story is quite dark. It’s not that this didn’t bother me at all, but the way it was done somehow made it tolerable. Perhaps this was because the things that I consider to be reprehensible were depicted as such–they weren’t portrayed as good or normal. While some of the sexual scenes were descriptive, they were not gratuitous in my opinion. They showed what they had to, and moved on. A story like this is necessarily violent, but again, Quinn didn’t revel in it. She stated what happened, and then faded to black. I also really appreciated the fact that the only overtly Christian character in the story was kind, noble, and self-sacrificial–so very rare these days! (Most of the time if a character’s faith is directly mentioned as Christian, they turn out to be hypocritical and/or legalistic and merciless.)

So if you don’t mind the above mentioned caveats, the story itself really is very good–and there IS a happily ever after, too!

Language: some cussing, but few and far between

Sexual content: high, but tastefully done in my opinion (see above)

Violence: high, but tastefully done in my opinion (see above)