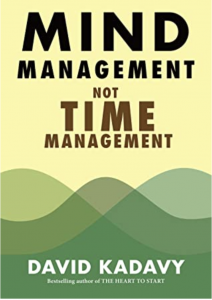 Thought-provoking for any of us who identify with Kadavy’s self-description of constantly finding ways to do more and more things in less and less time. I smiled a little as he described his pursuits to this effect: they definitely sound like me, and he’s absolutely right that at a certain point, there are diminishing returns. So he shifted his paradigm, focusing instead on when to do which tasks to maximum effect, based upon his mental state at the time.

I’m also already doing most of what he described in the book, though I hadn’t thought of it in so many words. Any new venture requires all of my mental focus, but then once I have it down, I can shift it to “back burner”–which for me means essentially auto pilot (I’m thinking of editing podcasts and then uploading them for distribution while listening to audiobooks or CMEs, or doing the same with newsletters). My best creative time, like his, is first thing in the morning, so that’s my Bible study and writing time four days per week. My workouts come next, and I’ve learned that I can listen to non-fiction audiobooks or learning-based YouTube videos during that time and retain the information reasonably well. Analytical tasks work better later in the day, and that’s when I do the rest of my work. By the end of the day when I’m doing administrative tasks, I have to listen to fiction–I don’t have the mental capacity for learning anything new.

The most interesting part of the book, or at least the part I found most original, was the segment on clock time vs event time. Kadavy moved to Colombia from the US. I also lived in Mexico for a time, and recall that the emphasis on the clock culturally doesn’t apply there, which was a hard transition for an American. But “event time” is what happens when you’re engrossed in what you’re doing, when you’re in “flow.” It also has the effect of making time seem to expand. It’s interesting how whatever you focus on in an attempt to maximize it has a tendency to slip away, as Viktor Frankl would say. Happiness is like that, too, and sleep–if you fixate upon either one, they will forever elude you. But place your focus on purpose, and happiness will arrive. Let your mind wander, and you’ll eventually drift off to sleep. Be fully immersed in the moment, and it will seem as though time expands.

Political content: I think there was some, but it didn’t smack me in the face or anything