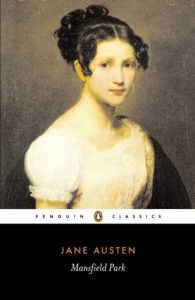 I tried to read this one for the second time, and finally managed to make it all the way through, but I definitely see why I struggled the first time though. Since I was listening to the audio version (and I’m usually multitasking at the time) I actually had to stop about an hour or so in, and read a summary of what I’d listened to thus far: it was that boring. The summary definitely helped, though.

This was the gist: Fanny is taken in by her aunt and uncle, who don’t think very much of her. She falls in love with her cousin Edmund, but he thinks of her as a sister. She is (like all Austin’s heroines) quiet and serious, and with the help of a contrived play in which Edmund and a flashy, flighty neighbor named Mary are cast as lovers, Edmund decides that Mary is the woman of his dreams and proceeds to ascribe to her all the wonderful qualities that she in truth lacks, and Fanny really possesses. Meanwhile, Mary’s brother Henry, equally dashing and vapid, at first decides he will make a game of getting Fanny to fall for him, but then he actually does seem to fall in love with her himself. Everyone pressures Fanny to accept him, but even though it appears for all the world that Edmund is already lost to her forever, she cannot betray her own heart–and besides, despite appearances, she doesn’t trust Henry.

Almost the entire novel is wrapped up in Edmund’s romance with Mary and final discovery of her true nature, while Fanny is ultimately proved right about Henry as he finds himself embroiled in a scandal. I was stunned when I reached the last few minutes of the book, and (spoiler alert) Edmund still had not fallen in love with Fanny. In fact, the event occurs in the span of one sentence, pretty much. The entire book sets us up for an event we never get to see at all! Definitely Jane Austen’s worst book in my opinion.