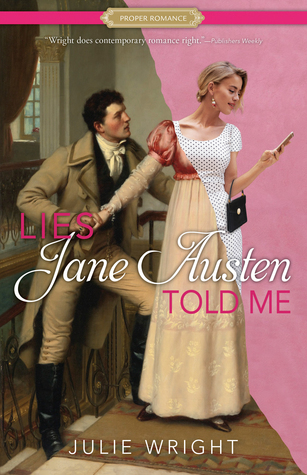 First of all: what a title! I’m so impressed, from a marketing standpoint. Automatically I know that I can expect a clean romance set in modern times, and the cover reinforces that nicely. Bravo, Julie Wright (or whoever was responsible for title and cover!)

The story itself reads like the screenplay of a chick flick, which has plusses and minuses. It’s predictable yet sweet, heartwarming but occasionally bordering on cheesy. True to the title, the main character (incidentally also named Emma, like one of Austen’s most famous heroines) is a Jane Austen fanatic, but she’s become disillusioned with the lack of happily-ever-afters in the real world. She’s trying to lower her expectations, yet finds herself comparing her life to any one of the Austen heroines throughout the book, despite herself. This did feel a bit like a gimmick after awhile, and I really didn’t need it to make the title feel relevant.

The basic plot: Emma is dating a Darcy-esque (or so we think) super rich guy named Blake, but surprises him at home and finds him with another woman. He swears there is nothing between them. Blake’s brother Lucas ends up chasing Emma down, and one thing leads to another such that Emma finds herself witnessing what she perceives to be a showdown between Lucas and his drug addicted ex, with his little girl April caught in the middle. But then Emma gets to work, and–surprise!–Lucas turns out to be the new consultant. Lucas spends much of their early interactions trying to get Emma to give his brother a second chance. Emma, while falling for Lucas, tries to tell herself this is mad because 1) he’s Blake’s brother, and 2) he apparently has a child whom he’s not caring for. (See her prejudice there? Hehe.) There are lots of little wink-winks throughout the book for Austen fans. And just as we Austen fans might hope, nobody jumps into bed with anybody else, and after some serious misunderstandings get resolved, they all live happily ever after.