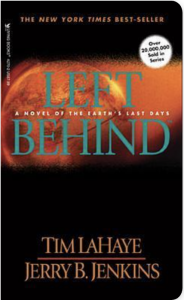 My mom read this to me when I was probably a pre-teen. As I recall, we didn’t finish the series, though I think we read perhaps four or five of them. They came back to my attention recently as I listened to a YouTube series on the Book of Revelation by Chuck Missler, and he mentioned that he knew the authors personally (and even inserted the areas where he disagreed with their interpretations.) After studying the source text, I thought I should revisit the retellings, since I barely remember them. It’s definitely gripping!

The story follows four main characters: Rayford Steele, pilot; Hattie Durham, flight attendant; Rayford’s daughter Chloe, and Buck Williams, newspaper reporter. Rayford is piloting a plane, fantasizing about an extramarital affair with Hattie, and Buck is a passenger, when the rapture occurs mid-flight. (I love that the authors don’t waste any time in the setup; they get right to it.) None of them are believers and they are, as the title suggests, “Left Behind.” Just before this happens, though, we meet Rayford’s seriously annoying wife Irene in flashback.

Side note here. My biggest complaint with this book is the same for the overtly Christian media industry generally, and that is that the agenda screams louder than the story. I *am* a Christian, I agree with Irene, and I still cringed as she preached at her husband. Really, she was a vehicle for the authors to preach to the reader. Even though she got no further “page” time because she was whisked away by the time Rayford got home, numerous other characters took up the role as the story went on. But, I wondered, isn’t that the story? The conflict *is* that they’re trying to make sense of what happened, and they’re lost, and then they find Jesus. That’s the resolution. How else can you tell that story without being super preachy? Unfortunately I really don’t know, but man, it was painful.

Aside from those little altar call interludes, though, the aftermath of the rapture includes the dynamics between Rayford and his skeptical daughter, Rayford and the superficial yet jilted Hattie, Buck Williams and Chloe (a rather clumsily written love story), and Buck’s interaction with the enigmatic and smooth-talking Nicolae Carpathia. It’s clear at once that Nicolae is the antichrist, but they really did write him well, I think. Even the reader feels the pull to like him, right up until the end.

I hope the preaching isn’t going to be as heavy in the next book, since three of the four main characters became believers already by the end of this one. But I do plan to read on, at least to the next one.